Andrew Motion and the poetry of war, 2015 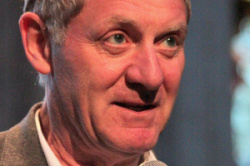 When the BBC sent Andrew Motion to talk to Harry Patch, who was then Britain’s last surviving first world war solder, and who died in 2009 at the age of 111, it was “my most interesting commission while I was laureate by some distance”, the former poet laureate told his audience at Teddington’s Landmark arts centre in south-west London on Thursday night.

It was also the starting point for a process that involved Motion embarking on a series of poems about war, leading to his Ted Hughes award last month for his work based on interviews with soldiers returning from Afghanistan. At Teddington he read ‘The Death of Harry Patch’, from his collection The Customs House, which imagines “hundreds of thousands of dead who lie there” on the Western Front rising up as Patch runs “along the duckboards” to join them. It is a moving and humane poem that bears the weight of first world war poetry upon its shoulders.

Motion talked of how, being born in 1952, he had never fought in a conflict, unlike his grandfather and father, yet war had now become part of his “imaginative life”. His father had taken part in the D-Day landings, fought his way into Germany, and ended up close to Belsen, where Anne Frank died: “He knew it was there, because he could smell it.” He read a powerful, poignant poem, 'Now Then', that refers to this.

He acknowledged the “no poetry after Auschwitz” school of thought, but insisted that “you have to keep saying it, otherwise people forget”, while at the same time knowing “you’re going to fall short” of recapturing the event, because you weren’t there.

This war poetry journey has led him to Coming Home, a series of poems, aired on Radio 4, that Motion wrote about the last (or almost the last) British soldiers to leave Afghanistan, and which won the Ted Hughes award for innovation in poetry. He spent time at the British army camp in Bad Fallingbostel, in northern Germany, interviewing soldiers, then wrote collaborative poems based on transcripts of the conversations they shared - and, in one further case, with the London-based mother of a British soldier who had been killed in the fighting. These poems will be published later in the year in book form as Peace Talks, by Faber.

Motion said that when he first went through the transcribed conversations – “a huge pile of paper” – in search of poems, he couldn’t at first “find what I was looking for”.  He added: “The army today drills out of soldiers the quality of talking eloquently or almost openly about what they’ve experienced – by and large the accounts were very sparely described.”

Then he realised that the brevity of the descriptions “could be a very interesting element of what I could do”. He read ‘A Tourniquet’, the account by a traumatised Afghanistan veteran of a child who stepped on an IED, and became a double amputee: “One boy: / he had shorts and a dirty vest, / he stood on a mine;  … We heard later he survived. // So yeah. Brilliant.” Another poem, ‘The Gardener’, is about a mother who lost her son, and compares England, “a very green place”, with Afghanistan: “Here everything is purple, orange.”

The comparison between Sir Andrew Motion’s sombre, austere and occasionally slightly diffident tone at the microphone, and the poet that preceded him, Owen O’Neill, could not have been more dramatic. Providing the counterpoint to Motion’s gravitas, O’Neill encouraged the audience to applaud each poem if they wanted to – “that way I know I’ve finished”; admired the magnificent venue, a former church, but wanted to make clear that “I’m not anti-religious, just not religious”; and at one point read a poem about his father while in a totally horizontal positon on the stage.

Introducing his poems with the assurance of a stand-up comic, O’Neill included one for Seamus Heaney, another about being struck by lightning while stealing apples from a nuns’ orchard; and delivered a very funny routine about almost being kneecapped by the IRA. There was also a poem, ‘Shoe Polishing’, which talked of seeing shoes in their thousands, “twenty feet high, ready for fire, I wanted // to polish every one, wanted to pair them / together, spit on them, take them in hand, / shove my fist in there and wipe them within / an inch of their lives.” You could sense the packed audience of 150 wasn’t sure about this one. Black humour, bad taste? Or an honest attempt to create poetry from the depths of horror? O’Neill may play the clown - but this was serious.

◄ 'Never resting, working from sheer will and memory, working with quill and ink if need be'