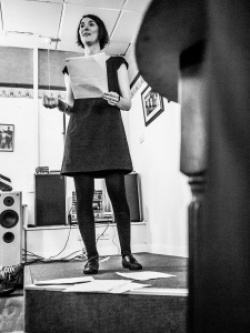 To see a world in a grain of sand, wrote Blake, and heaven in a wild flower. On Thursday, the Risk a Verse audience at Milnsbridge, Huddersfield, was shown a world with which most of us were unfamiliar, through the specific grains of Louise Fazackerley’s family’s truths: a wife and child at home as army medic husband/father served in Afghanistan, with their differently fragile, separate yet umbilically connected lives.

Hell, rather than heaven, perhaps most associated with this flower, Louise neatly playing potential parallels between poppies of remembrance– “lest we forget, lest we forget” - and the blood-red cultivated masses of the opiate through which her man must wade.

The imagery, the intimate detail betraying war-weary world truths puts this, for me, above even Buffy Sainte Marie’s Universal Soldier; yet at its heart this magnificent 20-minute work - which Louise is developing into an hour-long production -  is about love, family, loss and learning: of self, of innocence, of confidence, of friends; and about our inability to lose our capacity for war.  It is in a fine tradition of telling truths – home truths here – about war through well-crafted poetry.

I witnessed the growth of the work as Louise shared developing drafts over recent guest spots, including the one causing Puzzle Poets’ Freda Davis, herself a consummate writer, to describe Louise’s performance in Sowerby Bridge as the best she’d seen. On Thursday at Write Out Loud, Louise took even that up several notches, leaving us transfixed by the lyrical, seamless flow of her writing, staging, performance and authentic, unique voice, perfectly modulated for this theatre piece commissioned by Verb New Voices, with the support of Arts Council England and the BBC.

Louise read from – though didn’t need – A4 sheets, which she then let fall to the floor, floating like poppy petals at a Festival of Remembrance. I noticed I was not alone in being moved by the mesmerising experience.

Risk a Verse indeed. I had no idea if it would work, introducing a guest poet, to what has so far been a high quality, popular if at times not populous, read-around poetry night at Milnsbridge Red and Green Club. It most certainly worked, and some, according to all I spoke to afterwards,

Louise was not the only star in the Red and Green Club’s firmament that evening. The read-around was one of the best we have witnessed there, with stark stanzas, humour, poltergeists, love in a chippy, an emotional reading about Gaia, and a rather splendid poem on toilets. On the  day that the Crossing the Pennines project learned it had won the People’s Millions pitch, bringing £50,000 of investment into the Colne valley, its director Jan Scrine read her ‘Jaggers’ Refrain.’

Louise Fazackerley has come a long way since starting out, as so many do, by attending a Write Out Loud night – in her case the Wigan one at the Tudor, in the days when I ran it. So it was lovely to see things come full circle on Thursday, with this marvelous poet declaring afterwards that she was going to be back. We also had a poem written on the spot by a young couple who had learned of the event via a tweet from Ian McMillan.

Ian had said of Louise and two her fellow Verb commissionees: “They speak with voices that ring with truth and shiver with promise”.  Promise fulfilled last Thursday. Dead proud of her, we are.

I am grateful to all who attended, and those who helped promote the event, and to the Red and Green Club team for putting their faith in the venture, for risking Risk a Verse. Here’s to the next one, 22 January, 2015.