Doctor with the right medicine: Write Out Loud interviews the Emergency Poet 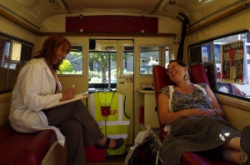 She goes round the country in a 1970s ambulance that she picked up on eBay, and with the help of an assistant, dispenses poetry on prescription to make people feel better. “Emergency Poet” Deborah Alma talks to Greg Freeman about bringing poetry to the people; her most “essential” poems - Brian Patten, TS Eliot, Seamus Heaney; the power of poetry to do good - and why her own poetry has had to take a back seat.

What gave you the idea, and when did you begin dispensing poetry as medicine?

My first experiment with this idea was at Wenlock poetry festival in 2012 and they were kind enough to let me practise on their festival goers. The idea came to me when I was looking for a minibus on eBay.  I had originally intended to set up a mobile creative writing bus to take into schools, and came across my first ambulance, which was from the 1950s, listed there and the whole idea came to me in a flash. It comes directly from my work with poetry and dementia and from passing poems to friends over the kitchen table.  I was a single parent at the time and there was no one to temper my apparently crazy idea.

How does it work?

It’s set up as a piece of theatre, as quack doctor, a fortune teller ...”’patients” are invited by the “doctor” in white coat into the back of the ambulance, asked to lie down on the stretcher and after a 10-minute consultation they are given a hand-picked  poem.

Who are your assistants?

I usually work with my partner and poet James Sheard who is ambulance driver and poemedic, or with Nurse Verse, who is usually a creative writing friend. They administer the poemcetamol for various ailments from inside the Cold Comfort Pharmacy and look after the queue. We also work in schools doing creative writing workshops from inside the awning.

What sort of feedback do you get?

It’s funny this, but the response has always been amazing. People love the attention, the time to put their feet up and to be given the gift of a poem. I had no idea that it would work so effectively when I started this!

What have been the funniest responses?

There is a consultation especially for children and these are usually the funny ones ... they always like poems with willies or poo in them! Otherwise I have been asked for poems to cure grumpiness, to bring peace to the whole world, to cure irritability, to help them find a girlfriend ...

And the most moving?

There have been very many moving moments ... recently a young boy at university was lonely, I have had people ask for poems for grieving very often; one woman asked for a poem because her best friend had died that morning, another man was on the way to his wife’s funeral, a woman with breast cancer, another diagnosed with months to live, poems to read at a wedding ...

Have you had any negative responses?

No, really, never. Only sometimes when it’s busy and I can’t get to see everyone. I think as it’s always free people recognise it as a gift  - and the old gift horse in the mouth adage might apply!

You’ve had a busy year. What are some of the more unusual places you’ve been called out to.

I have had a busy year. As well as libraries and literary festivals and city centres, I’ve been asked to attend to the guests of a summer wedding , which was lovely. I spent three days at Bristol Southmead hospital giving poems to staff, patients and their visitors. I’ve been to schools and made George’s Marvellous Medicine poems, and talked about diseases in the first world war to another. The last lovely event was for the Archway Charity at the Poetry Centre in Oxford, prescribing poems for loneliness.

Is there a poem that you’ve prescribed more often than any other?

This is a hard question! There are a few essential poetic drugs in my medicine chest, there’s ‘Inessential things’ by Brian Patten, there’s an extract from ‘East Coker’ by TS Eliot – “ I said to my soul be still ...”, but I think it might be ‘Postscript’ by Seamus Heaney ...

You’ve said that this emerged from your work with poetry and dementia, with literacy in primary schools for years, and “from being a poetry evangelist and from listening to friends and their problems over the kitchen table”.  This all suggests you have pretty strong feelings about the power of poetry to do good.

I have come to this, slowly, but yes ... I think poetry more than any other art, can speak intimately as though from one person to another, the shared experience - or the light shining ahead, maybe?

Are you involved in other poetry projects?

I’ve been asked by the publisher Michael O’Mara to put together an anthology from the tried and tested poems that I use, which I’m enjoying working on over the winter. I’m also beginning a grant application to do some work that merges the Emergency Poet  with the work I do with people with dementia and to do some work in hospices in the future. Also Jim and I are thinking about running small retreats for writers from our home in mid-Wales.

Do you get much time to write your own poetry, or perform it? Do you ever prescribe one of your own poems?

I never prescribe my own work, it’s not really suitable and I have too much self-doubt anyway. I haven’t written much at all for a couple of years and I’m having a writing crisis! I’ve been lucky enough to have got a grant to attend an Arvon retreat in a couple of weeks and I will give my writing a good hard stare again.

Do you see your service as a way of making poetry more accessible to people? Of removing a barrier that some people think is there?

This is my favourite question. Yes ... it is why I do it. Outside of poetry festivals, 95% of the people in the back of the ambulance never read poetry, have been put off poetry at school and are frightened because they don’t understand it. My job is to disabuse them of this idea ... there is poetry that is for them, that will speak to them, and if I have any skill I think it is here.

What kind of buzz does it give you?

I love it! It’s always such a positive and uplifting thing to do. I am getting better at it too, and I am beginning to feel like a wise woman or crone, what a joy!

◄ In praise of three poets from the West Midlands

What a marvellous thing you are doing, Deborah! I am sure that you are brightening many a person's otherwise dull day with a lovely ray of sunshine...
Dorinda

What an amazing and inspired concept that can
only work via the necessary degree of belief
in its existence. I might even describe it as
British eccentricity at its best. Certainly,
I go along with the idea that poetry can be
medication for a troubled mind as well as a
point of human contact for those in need.
I wish those behind this scheme all they
wish themselves - in short, every success!
They deserve it.