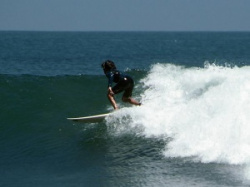 (This poem is dedicated to the select members of the S.A.S. .... Surfers Against Sewage)!

Just going through the 'motions'

Made of a thousand witches potions

A throbbing head and aching ear

The only safe place is a boat

The surf is up and roaring in

Seagulls squawking in the sky

Up to my waist and in the sea

I watch the Richards* floating by

This place reminds me of a chemist

With lots of poisons on a shelf

It won’t afford you no protection

But rather damage your good health

I watch a condom ride a wave

Then catch a tampon as it breaks

They both go rushing to the shore

Where children play in rock-pool lakes

I know that I will never see

The sea ’round here a slight shade bluer

But it’s the first time here for me

That I have swam in an open sewer

Thank you all very much for your very kind and welcome comments on Portreath. They were very much appreciated.. althought the work itself was a little 'tongue in cheek' and the contents very much a little of wind against tide!
(Sorry for the long delay in responding to your kind comments and thank you for the feedback).

How late to the party I was with this one. Shame I didn't read it sooner. Still, I enjoyed the imagery. What a vivid and disturbing picture you painted. I saw it so clearly in my head that I almost shouted, "Save the children!" aloud.

I love it Daniel ....Just going through the 'motions'

Made of a thousand witches potions...

A real cracker, still got me chuckling as I write this. Good stuff

Richards? do you mean floating voters?hope you have brought a note of excuse for being absent?

'No more on the roll'