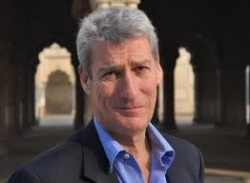 The chairman of the Forward Prize judges, BBC TV presenter Jeremy Paxman, has warned that poets today have stopped talking to the public and are only addressing each other. He was speaking after the unveiling of this year’s Forward prize shortlists. Naming the contenders for the best collection prize – Colette Bryce, John Burnside, Louise Glück, Kei Miller and Hugo Williams – Paxman said there was a "whole pile of really good poems here", and "nothing on the shortlist that I don't feel better for having read". But he also said he wished poetry generally "would raise its game a little bit, raise its sights", and "aim to engage with ordinary people much more".

"I think poetry has really rather connived at its own irrelevance and that shouldn't happen, because it's the most delightful thing," said Paxman. "It seems to me very often that poets now seem to be talking to other poets, and that is not talking to people as a whole." You can hear more of Paxman's views and ideas about poetry here, including his throwaway remark at the end about a possible "inquisition" of poets.

In an article in reply in the Guardian, George Szirtes, a former TS Eliot prize winner, said: "Let's call the criticism just and examine the charge. We wouldn't want this to descend into yet another tedious defence of the modern against the traditional. The first world war poets were (mostly) comprehensible, John Betjeman was comprehensible, Philip Larkin was comprehensible, Wendy Cope is certainly comprehensible, and they are all modern. This is not about modernity, it's about poetry."

He added: "We know at heart that poetry isn't just a pretty way of saying plain things ... Certainly some poetry is abstruse, as is some music and art. As is a great deal of political discourse. The difference is that abstruse political discourse is often bland. Poetry that is bland is not poetry.

"Eliot thought poetry in his time had to be difficult, and indeed he can be difficult if you try to read him as though he had written prose. Read him as voices echoing between speakers and events in time, and you enter a world as real as that in which we actually live. He was a major poet, as was WH Auden. Neither was necessarily easy listening for the People."

Susannah Herbert, director of the Forward Arts Foundation, said she hoped that Paxman's commens would "kickstart an overdue national debate about the power of well-chosen words, communication and the role of poetry in our collective lives".

Paxman was one of five judges on the Forward panel, alongside the musician Cerys Matthews and three poets: Dannie Abse, Helen Mort and Vahni Capildeo. The judges read 170 collections and 254 single poems before arriving at their shortlists, with the £10,000 best collection prize pitting Bryce's poetic account of growing up in Derry during the Troubles, The Whole & Rain-domed Universe, against Burnside's All One Breath – his first collection since his Forward and TS Eliot prize-winning Black Cat Bone. Glück, a former US poet laureate, is shortlisted for Faithful and Virtuous Night, in which she draws "on the worlds of fairytale, of dream and of waking life", according to her publisher; Jamaican poet Miller for The Cartographer Tries to Map a Way to Zion; and Williams for I Knew the Bride, which includes the poet's recording of his ongoing hospital treatment in the poem ‘From the Dialysis Ward’.

Alongside the five poets competing for the £10,000 best collection prize, six are in the running for the £5,000 best first collection award, including former machine gunner and Iraq veteran Kevin Powers, and five for the £1,000 Forward prize for best single poem.

“I hope to go into a poem sober and come out a little drunk," said Abse, who noted that many poets published for the first time this year were inspired by conflict, whether in Iraq, Sri Lanka or Ireland. Here are the shortlists in full

The prizes will be awarded at Southbank Centre on Tuesday 30 September. The 23rd annual Forward Book of Poetry, containing the judges’ choice of the year’s poems, will be launched on the same day. The event falls in the week of National Poetry Day – Thursday 2 October. Tickets for the event, introduced by Jeremy Paxman and Cerys Matthews, are on sale to Southbank Centre members on Tuesday 3 June and to everyone from Wednesday 4 June.

As a highly educated `language savvy` user Jeremy
Paxman chairing the Forward judges, - despite feeling better- says that poets have connived with their own irrelevance, must engage more with the people as a whole. And should submit to an explanatory `inquisition` by those people....I could not agree with him more. (preceded by an inquisition by the poets themselves into their own poetry) If poetry has become irrelevant to the increasingly educated ordinary person then something is seriously wrong and the poets should do something about it.

George Sirtzes answer in the Guardian that poetry is felt rather than understood simply will not do. How can we persuade the ordinary person to feel something after we tell him that he cannot understand it? Words, as Sirtzes says, carry a
baggage of music, context, allusion, history, and attachment. Indeed. and it is precisely these allusions which can be explained and understood as leading up to that `eureka` of poetic realization. Comprehension is an exactly inclusive word for the process but you arrive by elucidating the verbal path.

"The man on the Clapham omnibus" was more
related to the courtroom and the legal eagles'
remarks to a jury about the application of the common sense that was widely expected/respected in
the mind of the down to earth British working man.
The connection between common sense and
comprehension still has relevance.

Is this 'ordinary man' related in any way to the 'man on the Clapham omnibus' used by politicians to pretend they're making policy for everyone while really only making policy for themselves and their friends?

I write for the extraordinary people. And there's a lot of you out there.

I notice the 'ordinary man' is usually male, probably white, middle-class, able-bodied, cis-gendered and heterosexual. Just like me; 'cept for the middle class bit. 'Cept I like weird avant garde stuff, modern classical and weird jazz. No accounting for taste I suppose; but JP is not speaking to me.

Hmm - I think perhapsmr Paxman doesn't bother much with social networks and blogging sites where I see a lot of interaction with the reading public. I would think I chat with a dozen or more readers most days - I am sure most poets I now are not aloof as he seems to suggest, but hey, some guys can say something and expect it to be believed rather than anyone query it.

I beg to query it - and I wonder if we can expect an answer from the presenter - i would certainly wish him to 'present' the actuality rather more accurately than his suppositions, which will have done little good for the poets ninths country for sure.

Anyone here feel they are in need of 'raising their game a bit'? Chance would be a fine thing Mr Paxman - would you care to invite some of us onto your show to ensure a rounded discussion of the topic and bring the public's attention back to the live scene and the real people in their modest who are chatting to them between writing their latest lines...

So, what about it Mr Paxman, are we about to receive a 'fair hearing'?

JC's right.
The best that I can hope for is to leave enough money in my will to request a self published selection of my work for posterity and family use. None of them currently know I write, so it will be a shock.

Of course, this analogy doesn't work with people who write poetry. But that's the point, isn't it?

MC - I'd agree that the internet is great for giving us interactive on line sites like WOL; also for the ease with which we can now read poetry on line.

I'm questioning whether this shrinks how much people actually go out to buy books of poetry though. I also think that sites like Facebook and Twitter are very easy to get bogged down in. They can suck you in and steal the time that you might once have spent reading. Those are just some random thoughts I'm chucking out there though...

Listening to Paxo's speech I'm happy to say I agree with everything he says... but inquisition is a dirty word, with it's unamusing overtones of duress. Poets should be happy to explain their work, as best they can, but definitely under no great obligation to make a good case, they shouldn't be "put to the question" as the old system had it.

I'm somewhat surprised by the comment about art
and poetry suffering from the effects of the internet.
If WOL is any guide, the 'net is hugely beneficial
in bringing the written word to a huge audience.
Its only downside...the dispiriting variations of thuggish illiteracy on show in various forums I've
found when browsing this information "super highway".

I have oft quoted Adrian Mitchell before, and I shall quote him again:
Most people ignore most poetry
Because most poetry ignores most people.

Mark, brilliantly written. Do let the poetry world's best news editor, Greg, have full details of your show when you can.

A friend of mine was at a 'do' where someone said to Paxman, you're not big and you're not clever. Superb eh?

I seem to be in agreement with Isobel to a large extent here.

To me all seemingly relevant poetry must have a performance angle to it, even the major prize competition entries (the winners required to perform at some glitzy do) insist on this.

Being no lover of performance poetry and not willing to read publicly any work that I have ever written, competition entry would be out of the question for me.

As to JP's comments of suggested poetry navel gazing, it would appear that he does not appreciate the thriving performance scene.

Maybe Mark is challenging what 'an ordinary man' really is, MC? As he says, the average Joe Bloggs might not necessarily have the same taste in poetry as Jeremy Paxman...

I'd say that quite a lot of live performance poetry is written to be understood and appreciated by a wider audience. The reason for falling book sales might be down to other factors. Perhaps like the great British pub and the town shopping centres, poetry and arts in general are suffering from the effects of the internet and all it brings with it...

I note a Paxman quote from this posting:
"aim to engage with ordinary people much more".
This hardly seems at odds with "I write poems for
the ordinary man"" in the comment from MMS2014.

It's entertaining to hear Paxman whinge
I hope to see him at the Edinburgh fringe
I'll be there too, performing my poetry
(It's called 13 Years An Artist - it's free!)

After my show is a Q&A session
I suppose you could call it an inquisition
If Jez is in the audience should I be cowered
After what he did to Michael Howard?

Nah, I'm not scared, why should I be
of a millionaire newscaster from the BBC?
I write poems for the ordinary man
Not really for the likes of Jeremy Paxman.