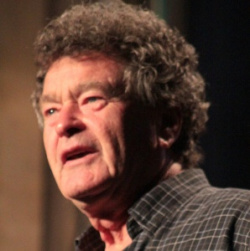 Brian Patten is a survivor of the 1960s. As one of the Liverpool Poets, with Roger McGough and Adrian Henri, he took poetry to a new audience with the joint Penguin publication, The Mersey Sound. Patten in particular, with his intense poems about relationships, inspired teenagers across the land to believe that they too, could have a go at poetry. I know. I was one of them.

Years have passed – well, many years, in truth. But Patten still, magically, retains his mop of curly hair, and at Teddington’s Word Café on Thursday, he entertained a packed audience with charm, wisdom, and a great deal of humour.

He still has the ability to cast a spell and conjure up a kind of wide-eyed, 60s atmosphere, with poems about teachers, one an inspiring mapper of lives, the other a dictator, trapped at the foot of a deep hole that has appeared in the classroom, his escape route a magic ladder so fragile only daydreamers can climb it.

But although such images are eternally appealing, these days there is more to Patten than that. If I remember a young man in his 20s who almost whispered his poems on stage, now he is a true performance poet. Along with affectionate poetic tributes to departed friends such as poet Adrian Mitchell and musician Kevin Ayers, he revealed a splendid sense of humour, warming to his theme with a succession of jokes of offbeat logic which he said were inspired by the Sufi mystics, at one time pausing to compliment himself on his choice of rhyme.

There was a long, comic poem describing domestic discord involving suspicious hair in the bed, a poem about a relationship with a “chaotic” friend of Christine Keeler  - “I always say that this poem was wasted on her” – and a  hilarious survey of the history of English literature, a kind of Chaucer, Shakespeare And All That, which concluded with the observation that with the ascension of Carol Ann Duffy to poet laureate, the “long reign of the white male poet was truly over”.

As if to demonstrate that fact, also on what should be described as a star-studded bill was canal laureate Jo Bell, a figure of great energy and influence in the poetry world. There is of course much more to her work than poems about waterways, although as a canals enthusiast myself it was the aquatic ones for me: ‘Oiks’, about hooligan drakes intent on an "old-fashioned gang rape" every spring, ‘Kingfisher’, “a bright grenade that blows the place apart”, and the quite remarkable description of the working of a lock in ‘LIfted’, which has been turned into a filmpoem by Alastair Cook.

Bell was preceded by Richard Tyrone Jones, who has chosen to look on the bright side of life after his close brush with death by transforming his experience of heart failure into a very successful one-man show. He provided dramatic glimpses of that show on Thursday with poems such as ‘Echo’ and ‘Heart Stopper’, as well as an aside about growing up in the Midlands while introducing a poem about an uncle’s dodgy advice to a young boy: “The good thing about growing up in Dudley is that it makes Birmingham look like Las Vegas.”

Also on the bill were Kirsten Irving, a young poet of great variety, style and talent, and one of two editors behind collaborative poetry press Sidekick Books; and musician and singer Isolda Hawkes-Tan, whose haunting voice, both solo and with her band, is reminiscent of Kate Bush.

So, quite a night. Host Julie Mullen’s awe at being in the presence of fellow Scouser Patten was palpable as she brandished a 60s vintage copy of his poetry, and flung rose petals over the audience. Her own poetry generally tickles ribs and other assorted areas, as in ‘I want To Be Taken Up The Shard’. But her poem about her 20 years as an actress – “I regret to announce that I’ve dried” – was properly poignant, too. It all added to a great atmosphere of warmth, expectancy, and nostalgia at the Word Café on Thursday night. And judging by the size of the audience, the word about the quality of the poetry at this venue, a former church now the Landmark arts centre, is spreading far and wide.

◄ The Tudor roar at Write Out Loud Wigan tonight

Yes Brian P. always seemed the quiet boyish one, but he knows how to manage an audience (not that his audiences are going to make life difficult for him). Whether it's stuff from the back catalogue or more recent writing, he has a gentle voice that smiles and entices, an accent that is still "exceedingly rare", and a wry self-deprecating manner that wins hearts and minds. Always makes me smile and he's not a bad poet to boot.