Check out Roger McGough's poems at Waitrose, and have a go yourself 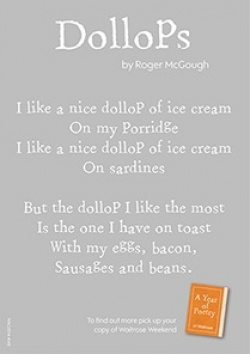 The deadline is Thursday 15 May for the first round of a poetry competition in which winning poems will be displayed in the aisles of Waitrose stores. A selection of short and light-hearted poems by the Waitrose “laureate”,  Roger McGough, who presents Radio 4’s Poetry Please, and is also the voice of Waitrose on its TV adverts, will be appearing in various places in stores, from the fish counter to fruit and veg.

Each month, for the next four months, McGough will also choose six submitted poems, to feature alongside his own. At the end of four months McGough will judge all 24, choosing a top three that will be announced on 2 October, National Poetry Day.

Poems must be between two and eight lines. They should be related to the world of food and where it comes from, and should also be “thoughtful and friendly, and perhaps funny”, according to Waitrose. You can find more details of how to enter here

Poetry shortlists revealed for Wales Book of the Year ►

Competitions » You can do more than just clap for the NHS – support its staff by entering our Beyond the Storm poetry competition!

This sounds like fun. With poems on the London
Underground making poetry widely available to
a travelling public, what a good idea to promote
the equivalent (of a sort) to a shopping public.
Congratulations to Waitrose for this imaginative
in-house concept.