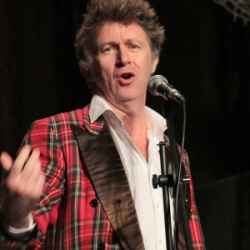 “Elvis,” compere Julie Mullen confided to her audience, “is in the building.” And what a building! “You did say it was deconsecrated?” the legendary resident of Graceland Caravan Park inquired later, seeking reassurance halfway through his set at the Word Cafe at the Landmark arts centre, in the seemingly-vast former St Alban’s church in Teddington, south-west London.

Teddington was both the birthplace of Noel Coward, and location for the filming of the Benny Hill Show at the nearby studios.  Elvis McGonagall paid tribute to these two cultural heroes, but noted that Benny Hill’s hit song, ‘Ernie,’ even with its line about “two-ton Ted from Teddington”, would never have the same resonance for him after David Cameron included it in his list of Desert Island Discs.

McGonagall, performance poet, stand-up comic and slam champion, and a Scotsman now living in Dorset, is a regular on BBC radio and has been spotted on TV. His targets go beyond the figures of Cameron, Iain Duncan Smith, Margaret Thatcher, Tony Blair and Jeremy Clarkson to encompass today’s “winner takes all” culture that has spawned TV cookery contests: “If your fondant fancies aren’t good enough, then out the door, son, shoot yourself.”

Some of his targets may be expected, but the fire is withering, even if it is delivered with a smile and a twinkle in the eye. McGonagall’s memorable poem to mark the death of Lady Thatcher at the Ritz hotel in London last year - “the people’s Meryl Streep” - includes the lines: “Public service sold for private wealth / Community and kindness killed by stealth”, and concludes: “All her dreams are alive and well / and living it up at the Ritz.”

There is, of course, a hymn of praise to “bonny Caledonia”, for all its faults, including being “the land of the useless goalie”. Michael Gove escapes lightly, but Duncan Smith is a pantomime villain – “the hoi polloi are on the fiddle” – and David Cameron (‘You Can Call me Dave’) emerges as “a little bit Moses, a little bit Hughie Green”.

Gonagall’s world view is spot-on: “To paraphrase George Formby, Mr Wu will be running the laundry for now on.” A couple of years ago, he looked in on an Arvon course run with Write Out Loud to offer advice to performance poets. He’s a quickfire and skilled performer who knows his audience – he had them in hoots - and his stuff. The former St Alban's is where Noel Coward was baptised; they can now say that Elvis McGonagall performed here as well.

Before Elvis there was a full line-up of supporting entertainment at the Word Cafe. First up was Mike Galsworthy, who encouraged audience participation with his tribute to David Attenborough, delivered in a confidential whisper. Musician and comedian Cecilia Delatori sang about mothers – ‘Have yourself a passive-aggressive Christmas’ – and about the dowager of Downton in ‘Dame Maggie Smith plays the blues’, complete with strangulated vowels.

Award-winning, US-born Cheryl Moskowitz provided the serious material, reading poems about the New York subway, Central Park, therapy misunderstandings, and Glastonbury, from her collection The Girl is Smiling. And musician David Goo opened with a song called ‘I Don’t Believe in Atheists’ - suitable, given the setting.

Michael Rosen leaves ICU after 47 days but remains in hospital ►