The Ballad Of The Artful Dodger 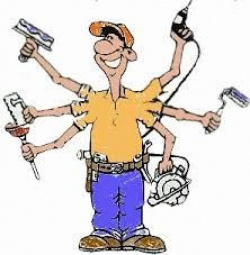 Had an ordinary sort of employ

But his wife was a martyr to his penchant for barter –

DIY’s what he used to enjoy

What he couldn’t do with an old tube of glue

And a short piece of string or a tack

Wasn’t worth writing down –

He was known through the town

As King Bodger – not of all trades the Jack.

Like a knight on the trail of his own Holy Grail

From a rusty old nail to a bottomless pail

All got stored in the kitchen or larder.

And he found that she came home quite late

He tried fixing a light to the gate.

By gluing a match to the edge of the latch

He was hoping to light her way home in the night

But instead it just burnt through the handle.

To whom fiddlin’ and burns were the norm)

Explained to his mate, standing, singed by the gate,

That he’d just tried to keep her from harm!!!

Plan ‘B’ meant a grand change of tactics, our man

Used a lamp and a wire and a peg

Leading out of the door – which his wife never saw

As she tripped up and broke her left leg.

Sunk with despair, his wife in her wheelchair

He fried bangers and mash with his blowlamp ‘til – flash

One exploded and hit him in th’ eeye.

He thought I can’t fail with a simple handrail’

Which to screw to the wall he did try

Next he rigged up a hoist to a solid wood joist

So she could bathe with her leg still in plaster

But he drilled through the plank ‘neath the main header tank

So she’d a shower – which weren’t such a disaster.

One more thing was needed our bold fixer conceded

That’s to widen the door to the hall

But it grieves me to say that he’d no R.S.J.

So he’s a doorway but hasn’t a wall.

That is save for the whites of her eyes

And as she washed in cold water, he thowt that he oughta

Make it up to her with a surprise.

Inspiration did lack, till he picked up some scrap

From a knackers yard just a week later

With unbridled restraint (‘cos he’d got some black paint)

He swapped his hub caps for an old radiator

He worked on his plan with much verve and élan

(He’d no brush, but an old shirt of flannel

To put paint on quite thick, yes it right did the trick)

And he’d soon got a smart solar panel.

Putting old copper tubes through a hole in the roof

He connected it up with great ease

With a gleam in his eyes he recorded a rise

Of 1 and a quarter degrees.

And his wife said with feeling – under most of the ceiling

Though the ruins still stand, monument to the man

Whom his ma with great love, christened Roger

That should really be called ‘Artful Bodger’

I enjoyed reading your poem Yvonne.I know one or two fellows like this,great fun.

No wonder you've been under the blankets for so long, Bonny. You've been composing this magnum opus.
I can completely relate to your hero but would suggest he invests in that useful tool of bodgers, the rackate'een.