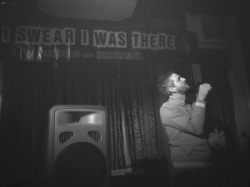 I Swear I was There, this third evening of poetry/comedy/music created and hosted by Salford’s own JB Barrington (aka WordsEscapeMe) at the Nag’s Head in Manchester, was packed to the gunnels. And rightly so – a barnstorming fusion of wit and wisdom, warmth and real northern humour.

I have a soft spot for the upstairs venue, having hosted many an evening there myself over the years (union meetings, and not quite as funny). Barrington, pictured, is a firm but friendly MC, keeping a boisterous crowd quiet for the poetry but encouraging a friendly atmosphere during the breaks which were booted up by a great soundtrack.

Rotherham’s Gav Roberts kickstarted the action with a gritty mix of sharply-observed comment and touching anecdote. He’s impossible to dislike because amongst all the bravado there is shared experience and gentleness. Women trying to change men, the north-south divide illustrated by the Savoy hotel sign made by Sheffield steelworkers, and a couple of crowd-pleasing pieces about the ups and downs of addled nights of pleasure and relaxation all hit the spot. The astonishing and surprising ‘Delicate Hands’ which ended his set brought tears to the eyes of even the toughest in the crowd.

Barrington’s own set was peppered with irresistible stories of his childhood,  with apologies to his mum, in the audience for the first time. So many of these stories are common to working-class northerners but, to steal a phrase, it’s the way he tells them. A fan in the audience told me JB shies away from the lazy critic’s habit of labelling him the new John Cooper Clarke – but in a way it’s inevitable.  He is rhythmical and has a real understanding of the form of poetry (yes folks, he does rhymes) but he is a generation removed from JCC and brings 21st century edge to his words.

He can tell a story for sure, but there is real class to his poetry and some of his references take him away from punkdom and bang up to date. ‘Things Me Mam Used To Say’ has overtones of Peter Kay, but it show extra texture and real discipline. His affectionate but sharp dig at the people on his estate who started having foreign holidays (illustrated with one of those dreaded senorita dolls) struck home. And anyone who can get in a reference to Walden’s World on the telly plus a plug for Owen Jones’ book Chavs during his set is okay by me. Haemorrhoids, working men’s clubs, coffee shops, bingo queues, Greater Manchester’s horrific shopping mecca the Trafford Centre, Jehovah’s Witnesses and Chinese policemen (the lack of) all ignited the crowd. ‘Our Kid’ was a touching tribute to his brother. Barrington has now decamped to York, but it’s true, you can take the boy out of Salford …

Marvin Cheeseman was the grand finale in the words section and by the time he came on there was a real buzz among a crowd who knew what was coming. He is as sharp and cheeky as the rest but the humour is unremittingly infectious. I defy you not to laugh at his take on double-entendres, ‘Look at the Size of that Sausage. Snigger at ‘Postcard from The Edge’ (a clue – it starts “Dear Bono …”), a brilliant take on a well-known song with ‘Craig David Gets Food Poisoning (parts one and two)’, a pop at Primark and pound shops and a flurry of limericks covering Sharapova, Shatner, Agassi, Rooney, Richard Whiteley, Roy Keane and Norman Whiteside. ‘A Poem For Europe’ (with apologies to Dana) might get the Ukraine/Russia crisis talks off to a better start and his affectionate but sharp observations of a Coldplay concert were uncomfortably astute.

I couldn’t stay to hear the much-anticipated acoustic set by Death To The Strange but as I dashed for my train with the sounds of Cheeseman’s nod to Morrissey in ‘Heaven Knows I’m Middle-class Now’ ringing in my ears and bumped into a merry fellow traveller waving a bunch of gladioli, it all seemed so right. And when I picked up an old Metro to find an hilarious interview with William Shatner my evening felt complete. I KNOW I was there – make sure you are next time. Bravo.