Some of us want no part of a UK 'brand': Kathleen Jamie on independence 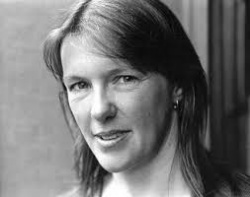 Leading poet Kathleen Jamie has spoken out on Scottish independence, in an article for the New York Times. Jamie, who won the Costa poetry award last year for her collection The Overhaul, said the issue was less about nationalism than about “a crisis of democracy that has built up over the last 30 years.

“Scotland gets what the south of England wants, regardless of its own aspirations and its own votes. (Currently that means a government dominated by Conservatives, even though only one of the 59 Scottish MPs is a Conservative). Westminster imposes policies that many Scots consider irrelevant at best, and self-serving and cruel at worst.

“Many believe that under ‘Team GB’ our industries have been swept away (under a Cameron predecessor, Margaret Thatcher), our social contract torn up, the fabric of our communities assaulted, our poor demonised, our immigrants deported, and our social services starved, withdrawn, privatised.”

Jamie added: “I’m writing from the Orkney islands in the far north of Scotland, a place of sea and hills, with a dynamic economy based on agriculture and oil, with as many links to Norway as to London. Here the terms 'British' and 'United Kingdom' already feel remote. It is odd to hear them used as rallying cries; they awake no sentiment any more.

"Those of us who want Scotland’s independence want it because we have no further interest in being part of a UK 'brand'; we no longer want to punch above our weight. We seek a fresh understanding of ourselves and our relationships with the rest of Europe and the wider world. If Scotland were independent, we would have control over our own welfare and immigration policies, look more to our Scandinavian neighbours and rid ourselves of nuclear weapons.

"We want independence because we seek good governance, and no longer think the Westminster government offers that, or social justice or decency. We find the prospect of being a small, independent nation on the fringe of Europe exciting, and look forward to making our own decisions, even if that means having to fix our own problems. We’ll take the risk.”

This year is the 700th anniversary of the battle of Bannockburn, when Robert the Bruce defeated the English. A specially-commissioned poem by Jamie has been inscribed on a rotunda monument erected at the site to commemorate the anniversary. She refered to it when speaking at the Edinburgh book festival last year.

You can read the full New York Times article here

It's worth understanding why Scotland is in the Union in the first place. As the Kingdom of Scotland they went bust in Panama and needed English money to bail them out.
Wouldn't happen again though, would it?

"United we stand, divided we fall".
The investment in North Sea oil surely came
largely through the money and confidence that
accrued from the United Kingdom as a whole - not from Scotland as a single entity. The words
"BRITISH Petroleum" come to mind.
Scotland already has its devolved seat of
government yet there still seems to be a large number of Scottish accents in the Commons and in
the Other Place, often affecting matters of interest to the English. Even so, we have
negotiated "give and take" to common benefit
for centuries, notwithstanding the SNP's
documented approach to the Nazis during WW2.
Is this really the time or place to pursue some
Fantasy Island scenario for a country with 5
million people but no guarantee of EU membership
or wider acceptance where power and influence lie in this increasingly global world? Is a
"romantic" idealism overwhelming the pragmatic
reality of life in a modern world?