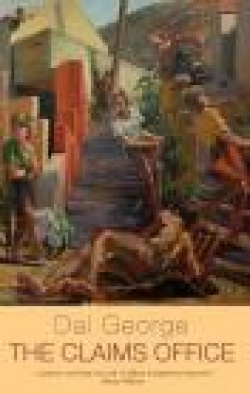 Dai George is a young poet, born in Cardiff, who now lives in London but often returns to Wales.  His debut collection shows a strong interest in religion and ancestors, is enriched by a deep sense of heritage, and he has also spent some time in America. In the centenary year of another Welsh poet, comparisons are tempting. But George is very much his own man.

There is perhaps one poem, early in the collection, ‘Mergers and Acquisitions’, that self-consciously echoes Dylan Thomas a little in its language and length of lines. But there is also a realism here that faces the modern world head-on: “I walk back past terraced homes I’ll not / afford in a prism of Sunday springs”, and an anger at a system that leaves people powerless: “So may / our shareholdings melt away and leave / the bullion of our livelihoods: warm bread, / purchased homes, and money a neutral liquid.” George is certainly not going gently down any metaphorical country lanes, or losing himself in apple orchards.

It’s maybe not that surprising that a young Welsh poet’s collection contains a number of poems about religion. In ‘Distraction During Evensong’, George sees chapel’s comforting rituals disrupted by “a late arrival at the back”, inducing the urge to “Leave now. Let the dinner burn”, even as “the choir whined beyond the lectern / wishful voices winding through the air”. But there is also acknowledgement of religion’s half-forgotten heroes of the past, such as the translator of the Bible into English. In ‘Tyndale’, “uncombed and open-necked” atheists are eyed with irritation, “in the heat of online arguments, / indignant in the snugs of heritage pubs”, alongside the man, later executed in Brussels,

The Pentateuch’s secret so that soon,

Somewhere back in Gloucestershire,

In the ragged light of his own tongue.

George appears a little hard on himself at times. What he describes as a “useless fetish for old men!”, in poems such as ‘Jakey for the Third time’ (“This dour little scrumhalf, / thrice my age and fitter”) , ‘Chestnut Festivals’ (“putting the finishing touches on his PhD / a few months shy of turning eighty”) , and ‘Seven Rounds with Bill’s Ghost’ (“scarecrowed in an album, / improving, tough to digest, / a bit like bran. Sweeter, mind”) appears instead to this sexuagenarian reviewer as a commendable appreciation by a young man of achievements spread over lifetimes. Anyway, I think he’s being ironic.

There is, after all, a lot of humour in this collection. There is amused affection for ancestors in ‘The George’, including a “Huguenot great grandsire … don’t / even get him started on the Treaty of Nantes”, “the highwayman / who someone traced to someone’s distaff side”, and “the gypsy someone had a tumble with, and hence / the auntie’s Persian eyes.”

And he is not wholly absorbed by Wales. There are poems about Bristol – “those simpering shops of artisan cheese / and pre-electric kettles … / my mouth watering for salt fish and jerk” (‘A Clifton Postcode’), London -  “Pure inter-war and after, all roundabouts and Deco sprawl” (‘Metroland’) – and New York, where he received a Masters at Columbia – “at Union Sq, the frat boys come and go”. There is also a conscious homage to Zimmerman in ‘Queen’s Lane Approximately’, where in Oxford town “they’ve sent back all your invitations / and they won’t be seeing you again”.

George is not misty-eyed about his own past. ‘My Peace, the Ornament’ contains a succession of images of urban, industrial noise that

yank me back to days when childhood’s brain

was a rammed junction, a crossing of trains, and the immaculate,

clockwork timetable of my peace was perverted, pinched, left to rot

in a puddle, as the carriages kept scraping and clanking their brakes.

The title poem of this collection has a confident sweep that demonstrates George’s concerns about valuing the past, and also the craft, rhythm and music of his poetry: “We maintain the records of our memory, / saving for posterity the string quartet / that packed the Institute, nights in a row”. Its final lines include these wishes for the future, in words that almost could be sung in chapel:

that one summer soon the lido will be full;

that the burnt heather will grow back gold;

that God is a steel mould into which we pour

It’s a good year to come across such a collection from a fine young Welsh poet.

Some of us want no part of a UK 'brand': Kathleen Jamie on independence ►