The art of choosing: magazine editors reveal how they sift and select 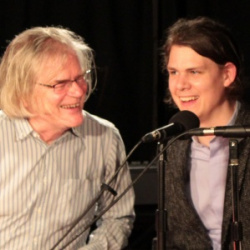 “I read the first line of every poem that comes in: if I read to the end it goes into a ‘maybe’ pile:” Ahren Warner, (pictured right), poetry editor of Poetry London magazine. “I make my mind up very quickly. I accept or reject poems equally quickly”: Maurice Riordan, (left) editor of the Poetry Society’s Poetry Review. “I get more letters complaining about lack of rhymed poetry in the magazine, than I get actual rhymed poems to consider”:  Michael Mackmin, editor of The Rialto, said, adding, with disarming honesty: “Sometimes I read the magazine afterwards, and think, why did I accept that?” .

Dedicated followers of poetry fashion? Gatekeepers of poetic taste, or “lifeguards”, as Maurice Riordan put it, saving some poets from publication? He added: “If your poem is published in Poetry Review, 4-5,000 people are going to read it. I’m surprised people aren’t a little daunted by, or fearful of that.” Mackmin agreed: “There’s an obligation for the editor to take care of the poet.”

The three editors read poems and then took part in a fascinating and entertaining Q&A session, chaired by Cahal Dallat, at Coffee-House Poetry at the Troubadour in west London. Organiser Anne-Marie Fyfe apologised for the fact that a fourth editor, Patricia McCarthy (Agenda), had been unable to make it because of the floods.

Mackmin went on to say that as far as poetic fashion was concerned, “I don’t particularly know what current tastes are. They seem to shift all the time.” He spoke of suddenly receiving a rush of poems about horses, or swimming pools, and speculated whether these subjects had recently appeared in workshops or on creative writing courses.

Riordan said: “I only publish what I like.” But Warner qualified this by saying that he “tried to publish the poems I think are good, which are not necessarily the same as the kind of poems I like.” He added that he tried “not to get grumpy” about submissions.

Mackmin said the quality of submissions had improved, and the amount of poetry sent in had grown hugely, with many more women poets submitting, since he began editing The Rialto. He partly ascribed the increase to the boom in creative writing courses.

Riordan said that in every issue of Poetry Review “there are people there that I’d never previously heard of”.  He said that was partly because he was not “particularly clued into” what was being published in smaller poetry magazines. With the number of poetry submissions he has to consider, it was impossible to keep up with everything, he added.

How important are covering letters accompanying submissions to magazines? Warner said: “I don’t tend to read the letters that come with them. I go straight to the poem.” But Mackmin demurred: “Oh, I like the cover letters. They’re often very good fun.” He said he tried to avoid the word ‘rejection’. “I write ‘return’ letters. Some poets insist they’ve been rejected, but that’s their psychopathology.”

Riordan said “a good proportion” of the poetry he received “is quite good. A lot is quite daft.” He added that “there are more poems that I think are worthy of publication than I can actually publish, but it’s a relatively small percentage”. Mackmin said that often the poem he plumped for was “the last poem in the submission, the one they’ve slung in at the end”.

The editors agreed that it was hard to find a sufficient number of good reviewers. Warner said: “Serious reviewing and serious thinking about poetry is very rare.” Riordan took a more severe line: “People are very keen to review, but not very keen to write sentences.”

But he believed that despite the big rise in online poetry magazines, “people still like to read their poems in print, on paper. Our job is to put a beautifully printed object into people’s hands.”

And Mackmin maybe touched on the heart of the matter when he said, just before the end of the discussion, of himself and his fellow editors: “We are basically very odd, honest people … it’s just our opinion. We really don’t know.”

* Coffee-House Poetry is held regularly at the Troubadour. Its next meeting is on Monday 3 March, when Jo Shapcott and Daljit Nagra will read and introduce a first selection of young Faber Academy poets.

◄ A taste of Canadian poetry in Manchester

a poetry editor and a gestalt counsellor. Hmm, we dine with them don't we?

I think any perspective could furnish a poem, and a good poem stands on its own merits. All the philosophy, religion, psychology &etc available feeds in to the common experience - and that's what counts to my mind. More learning in poetry and the qualities of perception can only help, I'd have thought, but I don't know whether you're commending MM or despairing of him!

Am I the only person who found the opinions of these sentries mildly irritating and patronising? Mind you, not quite as bad perhaps as some rejection letters I could cite. The last line was true.

A wonderful and seemingly honest insight for all poets hopefully sending their poems to judgement. Thank you. (I too will now reassess every first line.)

Very interesting article about poetry editors and how they choose poems. One editor mentions choosing 'what is good' as (presumably) opposed to 'what they like' I would argue that if you choose what you like, you invariably end up with what is good. What you 'like' maybe purely subjective, but it is definite. What is good is (possibly) less subjective but much less definite too.
Choose what you like and you won't go far wrong, try to choose what is generally held as 'good' can lead you down the road of publishing poems simply because you know the name, so they 'must' be good. (PB avoids this and cronyism by reading blind)
I think the final sentence from Micheal Mackmin of The Rialto sums it up nicely “We are basically very odd, honest people … it’s just our opinion. We really don’t know.”
http://thepoetrybusmag.wix.com/change

All very interesting, the editors come out of this surprisingly well, better than anticipated! Good article Greg. Quotation brings the speakers into the light and then, of course, though it's futile to deny a return is a rejection, and "psychopathology" is not a word to be thrown around lightly, the editor who stumbled there was not the one to put it in print. I understand Maurice Riordan made a good impression: "saving some poets from publication." Yeh baby!

A very interesting article...with some
enjoyably frank views from magazine editors.
The great song lyricist Sammy Cahn - author of more "standards" than you can shake a stick at -
observed that you can't teach lyric writing:
ergo - you either "have it" or you don't.
I wonder if "creative writing" and other classes
that seek to instruct actually serve to block
individual creativity.
The mechanics of language that should have
been learnt at school - correct spelling and
grammar - supply the essential framework
upon which the imagination can build with
confidence, especially when seeking publication. It is depressing to consider the absence of
those basic essentials in poetry these days.
I wonder just how many poets possess a dictionary
and a thesaurus...or any other aids to a wider(and correct) vocabulary for use BEFORE submission.