Poet, essayist, sceptic - vegan who knows you can't get an ought from an is. Drummed out of the Tufty Club and cycling proficiency badge rescinded for jay walking. Rabbi at the Beth Midler synagogue in downtown Tehran until his rebellion against the hetero-normative patriarchy was brought to the attention of the anti-happiness committee. Their judgement, written in Pitman's shorthand was handed down just after the Rabbi had left town beneath a tarpaulin on the back of a jeep driven by a Zoroastran well-wisher. He fetched up in Finchley where a poem he composed from cut up management bollocks won first prize from the Jack Kerouac School of Disembodied Poetics. He's hoping to remedy dire economic straits with the right words in the right places. For now he contents himself with interpreting the morning toast for renegade Catholics. A graduate of the School of Zen Retribution he believes it's not a crime to change your mind or anyone else's. He enjoys upsetting dietary micro-managers and is considering becoming poet in residence for the Monday Club notwithstanding a better offer.

Hung Out To Dry If God the father sent Christ to die For the sins of you and I, Wear a crown of thorns, bleed and cry Oh dad you've hung me out to dry, Forsaken me, nailed me high (heave and sigh) - Then I don't understand the truth, Of this cosmic act of child abuse. Where one cannot do otherwise, blame Cannot be assigned. Judas & the Jews Constrained, fitted up, put in the frame, A suicide null and void. A ghastly charade, Of holy smoke and mirrors. What conclusions should we draw from this? What moral has been overlooked? What meaning was missed? That conscience makes penitents of us In the end? Your old man doesn't Always attend to your best interests? Your friends will sell you to the enemy? That the game plan depends upon a whim? That a god who made all laws is bound by them? Pause. For thought. When it comes To religion I'm wise enough to know That once the cat's out of the bag It's best to let it go. If God is good, and omnipotent Yet evil exists, Then either he's not good, nor all powerful Or he has a hand in it. 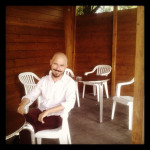 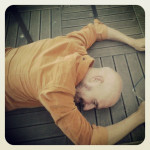 Jonnie, It was only a few days ago that I joined Word Out Loud and came across your work. I loved every line, roared with laughter only to be caught by the truth. I also enjoyed looking at all the photos. I hope to read more of your poetry and perhaps one day have the privilege of meeting you. Many thanks for brightening up my day. Keith

Cheers for the comments Johnnie. Me too: I love the discipline of tight rhythm and rhyme - it makes me think about my native language in an expansive way. Although I write in free verse too I believe that one shouldn't think of oneself as a poet until structured poetry has been...well, if not mastered then at least taken to task. Is that a contradictory principle for a revolutionary socialist to hold? I can picture many poets thinking me a reactionary fuddy duddy for holding that opinion, but I'd argue that I simply love my craft, this artistic enterprise called poetry too much to be slipshod, to settle for 'just' or 'always' writing free.

We have some things in common! I used to live in the West Midlands (Kenilworth) and I'm a vegan too. I don't know if you were raised Catholic as well, but your poems, particularly Hung Out to Dry, really struck me. Wonderful work. Best wishes. x

Hi Johnie - what a jolly good surname Falafel is! Glad to see you using the blogs - hope you are enjoying the site!