A taste of Canadian poetry in Manchester 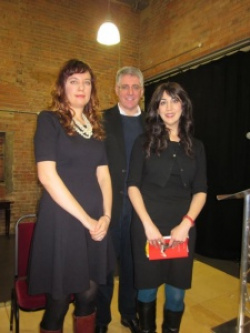 This evening at the Anthony Burgess Foundation’s Engine House could have been a disaster. Despite living and working in Manchester for 25 years, I had never heard of the Anthony Burgess Foundation (I know, I'm ashamed) and I knew absolutely nothing of Canadian poets (ditto). And it started on a sad note with the announcement of the death of noted Canadian short story writer Mavis Gallant

But from then on it became an unalloyed pleasure. Three poets, one in his prime and two women of such different tone and subject matter, introduced me and the modest audience to a selection of the most glorious language and moving subject matter.

I did know Richard Greene for his book Graham Greene: A Life in Letters; he is currently writing a new biography of the writer. In Canada, he is best known as a poet., His collection Boxing the Compass won Canada’s top prize, the Governor-General’s literary award for poetry.

His poetry has heart plus humour. He even refers to Coronation Street in one, which effectively makes him an adopted Mancunian. His poems pack a real punch, sometimes disguised by an almost casual, conversational tone. ‘Heroic Measures’, ‘Rigor Mortis’ and ‘Oils’, from his latest collection Dante’s House, were fine, but I thought ‘Corrections’ - informed by his voluntary work in prisons -  was outstanding.

‘To A Garden Folly’ (about the Kew Gardens Pagoda), ‘Poseurs’ (stick insects), ‘Don Draper’ (yes, the Mad Men anti-hero), and ‘Wishful Thinking’  were sumptuous cocktails - flowery, brightly coloured and decked with umbrellas - but containing a sting of pure alcohol, as in the uncomfortable ‘Uncanny Vienna’ and ‘Meditations’, inspired by a recent film about Hannah Arendt.

Sheri Benning’s poems are so different, freighted with loss and longing. She grew up on a farm in Saskatchewan, which her family abandoned in the face of mega-agriculture. She is a well-travelled poet of the world, currently studying in Glasgow. But her poems ‘Listen’, ‘Descent From The Cross’,  ‘Nativity’, ‘Dusk’, ‘Near The River’ and ‘Plainsong’ reflect a longing for the land and the rhythms of the farm. ‘Slaughter’ is a startling outcry about extermination of the buffalo.  You can read her work in Thin Moon Psalm and Earth After Rain.

This was a wonderfully surprising evening of poems and poets, curated by Canadian and Manchester resident Evan Jones, poet and co-editor of the anthology, Modern Canadian Poets (Carcanet) http://www.carcanet.co.uk/cgi-bin/indexer?product=9781857549386 . It gave me a taste for Canadian poetry, and introduced me to a wonderful cultural hub in my city.

The art of choosing: magazine editors reveal how they sift and select ►