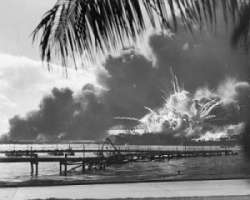 Yesterday, a day which now, will live amongst us for all time,
For history has changed its path
And we must fall in line.
For we at peace, with guarded arms, we chose to watch this from afar,
But we, deliberately attacked,
Must no more stand apart.

An Emperor, through wicked lies, convinced us of continued peace,
But sickening deceit was this,
As they slipped underneath.
For yesterday our countrymen were hunted down in harbour walls,
A naval fleet which, moored offshore,
Sent fighters to our pools.

Unprovoked and unprepared, our heavy losses were assured,
As battle ships became the graves
Of men within secured.
We scrambled a few dozen souls and got them to the skies again,
Though airfields were wiped from the map,
We took the fight to them.

We manned our guns, our boilers lit, we breathed those battleships to life
And fought against our enemy
Into the afterlife.
Relentlessly they sent their bombs, and struck the Arizona true.
She, mortally, took to her wounds
And sunk beneath the blue.

Yet still our bravest battled on, and clambered through her flooding shell,
Too quickly though she did succumb
And they soon lost as well.
One thousand men, one thousand souls, aboard that ship that fateful morn
But still their brethren stayed the fight
Until they too were torn.

But little could our heroes do when faced with such a secret pact,
Two-thousands souls were sent away
So now it's time to act.
I therefore ask, most verily, that Congress share in my abhor;
Against the empire of Japan,
Declare a state of war!

For yesterday, the 7th day, of this December, forty-one,
A declaration such as this
Came from the Rising Sun.
My kinsmen and my countrymen, respond to this atrocity
For this day now, and for all time
Will live in infamy.

And let it live, remind us all, that abstinence from world affairs
Cannot assure security,
Nor reassure our cares.
But we are strong, and we are proud, and now we stand upon our might
And we will show them, air to air,
From sea to shore we'll fight!

Do not forget what happened here, in Pearl Harbour, upon this day,
In their honour we rise anew,
And join the global fray.
This land of opportunity, of hope and utmost bravery
Will stand once more with our brothers,
To vanquish tyranny.