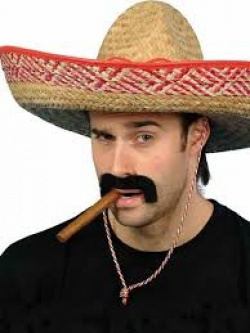 - this title should make me remember again

the plentiful misdeeds suffered in Spain

when I was a student, taking the train

I wasn't a beauty, no great femme fatale

totally green to the word 'machismo'

and how it gave vent to the game 'touch and go'

often a finger, a palm or a thumb

brushed rather lightly across a girl's bum

so hard to redress it would make your teeth gnash

worst of all still were the ones who crept out

in rush hour when plenty of folk were about

standing room only, sardines in a tin

but they'd find a way to stand behind me

pretending to look around innocently

you'd feel a chorizo jammed right up your ass!

- this title should make me remember again,

memories pricked by the pricks that I met

on buses and tubes and the trains that I'd get.

our daughters now safe to hop off and hop on

the buses, the tubes, the trams and the train

when travelling in Portugal, Italy, Spain...

If you're feeling bored on Wednesday afternoon (30th April) ... ►

Glad you enjoyed it Ray - but no - it's not meant to be racist - just a gentle poke at the Hispanics.

And to answer your question - no - I've never been manhandled by any other race. Someone did once offer to buy me for a case of whisky - but when I found out that they planned to send it to my father, I declined ;)

Enjoyed the poem. Is it just a Mediterranean thing? I bet UKIP would love this!

Funny girl YOU! I especially like the ending. (I'm glad you didn't add France in there, even though it happened to me plenty of times there too!)

Sent you a message on your phone...

I had no idea there was a comp! Have to agree with you and Cate about extending it... The more people involved the merrier! And Cate, last time (not Isobel's comp) I was half way through writing mine too and it was over before I could finish, so I never did.

A changed world? I dont think so! No daughter of mine will be travelling alone in Portugal, Italy or Spain in this life and probably not the next either!!!!!
Cate xx

Te hee - thank you Barrie - the title's the one bit I didn't choose - though I did interpret the words :)

You might remember that we occasionally run informal competitions on here. Dave Bradley currently has one running for the words 'touch and go'. Sorry to have put my smutty interpretation on them - I thought I'd get in there fast before John Coopey beat me to it!I'm hoping we get some more serious stuff at some point. You'll have to have a go Barrie!

And thanks Simon - glad you enjoyed!

Ha, this is very cool, really like this a lot Isobel, great humour throughout - thanks for sharing! :)

PS Totally forgot to say I LOVE the title. I always try to get word-play into a title and you succeeded brilliantly.

Great theme to exercise, Isobel. But not just in Europe. Try the Frozen North, even with layers of clothes! In public transport, leotards were a must. Men are so pathetic in that sexual prison. Laughter was always a swift defuser.

I found this very entertaining Isobel, it did make me chuckle. Now when I holiday in Italy or Spain, I know to blame the chorizo :)

Hola Isobel! Where is the trampoline? Just not the same. Oh, alright, the poem: I guess the Spaniard has as many names for his Chorizo as an Inuit for snow? (Incidentally I am impressed that you can differentiate, buttwise, between all manner of protrusions!) Oh - yes, the poem. You are as naughty as Betjeman (we dun him this evening at the Newbury Poets' Workshop) but it rollocks (as in rollocking) as 'one bashed out' should. Muy bien (or similar).

Errrr - you've got me there John! I was trying to keep it to ten syllables but going over to 11 here and there - some of them may have had feminine stresses but I wasn't too hard on myself cos I just wanted to bash this one out. I'm busy writing panto at the moment - oh yes I am!

Thanks for dropping in. Yes - I can imagine you've had your chorizo out in public before now :)

Chorizo, Isobel? That lets me off the hook.
Nice rhythm to the poem - dactylic or anapaestic or something like that (3/4 time).