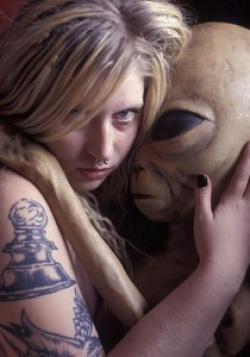 caressing and glancing off skin.

as a small, fair hand is held near –

then a blinding flash as two lovers kiss

and a slow, gentle, ebbing of fear.

as tracks of tears melt on her face.

She can’t understand his inhuman phases.

He can’t understand her strange ways.

and their traces are hidden again.

and she can’t bear his alien pain.

Close encounter with an alien feeling,

emotion built up – though they have no hearts.

A soul cut open, with no chance of healing,

their two worlds are drifting apart.

But memories record each tender moment

and they find that, someday, just by chance,

stars do collide and that supernova

◄ The Ballad Of Billy Nomates

Daniel In The Hyena's Den ►

Brilliant stuff. Reminds me of something Carter Unstoppable Sex Machine would write.

I embrace my feminine side Isobel - and all it takes for that vocal is a tighter pair of jeans :-)

Tee hee - now I've listened to it again, it's obviously a man - or a very masculine sounding woman!

I think that aesthetically I just thought it should be a woman so I imagined it - I wasn't questioning your manhood at all - now how's that for you sir?

Isobel
some people think that backing vocal sounds like a woman, you know ;-)

(Pay me no notice)It`s just this `thing` I`ve got about pictures(and sometimes music) sometimes restricting or overpowering (or over, or mis - directing) the words of the poem.

I felt that the delicate,inter-stellar quality of the alienation in the poem is not helped by the `cute` E.T.-like little guy.

(mind, with the hair, the tattoos and the studs it`s a toss up which one is the alien :)

Nevertheless, I`d miss most of the pictures if they weren`t there.

What a catchy little tune we have here - love it!
The words, the music, the photo - they all blend so well together!

Awww - how could I not love this?

In answer to the issues you have raised, it IS possible to love that which is alien... perhaps it's the 'otherness' which makes for the compelling attraction.

Great audio Ian and I liked the idea of having a second person come in on harmony - it should have been a woman though!

That's how the ladies see us Harry - I thought you would have realised that following your 'praise' query :-)

Although the picture somehow compels it to be read in `space-man` space rather than in incompatable, and emotionally human, space.