Competition closes in 16 days, 10 hours. Get details and Enter. 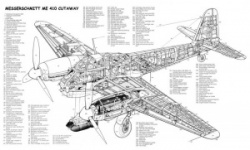 Messerschmitt Me-410 night fighter formates behind his prey - a Lancaster bomber. Hunter and hunted in formation. Below the city glows and pulses like a live thing. Orange lighting up the ground clear as day. Bright yellow when incendiaries ignite or buildings collapse. White flashes when high explosive detonate. Our German kin are being murdered down there.

Above us is darkness, black night hiding clouds. Trapping the souls of the dead so they witness the spectacle below. Pin pricks of light, hundreds of exploding flack shells from our guns. Hell is here! I feel my pilot throttle back. I know he is aiming at the Terror Bomber. Our little surprise will wake up the Tommie and send them straight to hell.

Bam-bam-bam-bam-bam-bam-bam-bam! roars our 2 and 3 centimeter cannon. Dozens of cannon shells spear forth into the night, crossing the two hundred meters between out 410 and the Lanc. Contact! Small explosions sparkle and dance between his port wing engines. Live flame circles and roars. Metal falls away like confetti upon my dead wife.

I see none of this attack. I sit facing rearwards, aiming the rear guns, manning the radios and radar system. I loosen my straps and lean forward. Over Rudi's shoulder I can see hell unfold. Our Lancaster flies wings level, on fire, over the city. One engine is dead, he slows. As does Rudi. I can even see his bomb bay doors open! I watch speechless, in awe. Rudi fires again.

Hello, my name is Hans. I'm the rear gunner and radar man. I explain to the Tommie. He smiles, I'm Dennis. I'm the rear gunner. Your cannons blew me in two. It's ok. Rudi is in deep conversation with the Lanc's pilot. Your plane is really magnificent. We've nothing like that. Easy to shoot down though with our cannon. Alfie replies, Yes to both old chap. You hit our bombload.