Competition closes in 14 days, 0 hours. Get details and Enter. 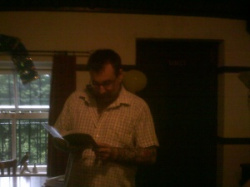 She worked in the local library part time.

She liked a lad who popped in fortnightly.

Her eyes sought him out whenever he was there.

A shyness inhibited her asking him out.

In time he stopped going to the library.

For someone so quiet, that was bad.

Then one day he returned.

On seeing him her joy was only fleeting.

He was no longer the tall fit happy young man she remembered and held in her heart. His legs were missing and an arm withered.

When he saw her distress he drove his electric chair over.

For the first time they really spoke.

Please don't cry. I know I changed. I joined the army. A Taliban bomb got me and killed two of my mates. I'm Jack.

She knelt down and kissed Jack and held his good hand.

I'm Hannah. I love you Jack. I feared I'd never ever see you again.

Jack wiped her tears away and smiled.

I won't leave your side now, not ever Hannah. I missed you. As the army medics tried to stop me dying I thought of you. I promised to come back for you. Here I am...