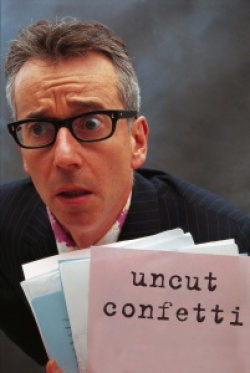 The magnificently shabby surroundings of Gullivers in Oldham Street, Manchester, provided the backdrop for what turned out to be a hugely entertaining  bill on Wednesday night. The last time I scaled two flights of dimly lit uncarpeted stairs, only wide enough for one medium-sized person to ascend at a time, was in Soho in 1976. I half-expected a gorilla in a monkey suit (why not in a gorilla suit?) to be waiting at the top to turn me upside down and flush out my loose change, but instead we were met with Ben Mellor in the box office/hat check girl role.

Matt Panesh’s lively introduction to an interestingly diverse audience seemed to fall on deaf ears, so determined to set a positive tone he refused to leave the stage until everyone got focused on the job in hand, and then on a crest of sustained applause, he handed the baton (Olympic legacy metaphor) to warm-up act Jackie Hagan. I’ve seen and heard Jackie Hagan any number of times but she made her 15-minute slot worthy of any professional comedy stage and charmed, yes charmed, the audience with a polished routine involving her much quoted mum, Skelmersdale, and her experiences of being sectioned. Like “charmed”, mellow is a word I scarcely use without thinking. “Charmed” and “mellow” are not words that often spring to mind over a JH performance, but this was angst-free delivery where even her “the working class inherit anger, the middle class inherit a house” line was delivered with a twinkle. The audience hung on every word and were left wanting more.

The first break revealed an interesting posse of musicians, poets and other performers filling the back of the room. The unassuming Mr Hegley was leaning in the shadows, ever polite, as admirers tried to kiss the hem of his jacket. I think that’s they were doing. John Darwin let it be known that he had just made a complete faux pas by addressing Mr H as “Hegmeister” but I thought it was naïf and rather sweet.

That the audience was now beginning to think and act as one was exploited fully by John Hegley whose first act was to rearrange the seating, encouraging everyone to get at least three feet closer, and bringing the shadowy characters shuffling in the background to the fore. Twenty minutes later we would have all been sitting cross-legged singing “ging gang gooly, gooly gooly gooly whatsit” had he so instructed. Over the past few years I’ve seen Mr H working the comedy and poetry tents at festivals, no mean feat when the back wall is rucking like a clipper in full sail, but this small dark intimate venue and willing crowd seemed to genuinely bring out a comfortable and relaxed performance. He was quite honest about forgetting to bring his new material; even Waterstones didn’t have a copy. But he turned it into an engaging anecdote by the end of which we knew his family, in-laws, neighbours and cat as if they were old friends. Old, quirky, slightly eccentric friends. Taking his cue perhaps from previous performers whose souls and smells linger on at Gullivers he began to strip off, explaining that he’d also left his performance clothes at home and was a bit overdressed for stage work.

With the support of a borrowed mandolin (credit Tom) he covered a range of well-loved tracks, responding to requests from the audience, without faltering. I was pleased he did Greavsie. It’s our Sam’s favourite and we were only talking about it a couple of hours before. It wouldn’t make sense to quote individual lines out of context but the audience roared at classics like Luton Bungalow, Scoutmaster (always carry a plaster), Stand up Comedian and extracts from Alphabet of Animals, as if they’d never heard them before.

One shouldn’t underestimate the verbal prestidigitation employed by John Hegley, from the clever to silly, to both simultaneously. He is in a purely older tradition of dry, almost deadpan, humour (although tonight he smiled readily on stage). He explores topics we can identify with without any recourse to profanity, obscenity or scatology. There’s very little irony, just oodles of absurdity about dogs, glasses, or hamsters. You could take your mother to see him if you had one. It’s almost vaudeville or end of the pier stuff. I can see him in a striped blazer, boater, white flannels; a southern George Formby with mandolin instead of banjo. But isn’t he a lot cooler than George, you ask? He is now he’s taken his Dennis the Menace jumper off.

Apart from his distinct poetic style  (Pat, you are fat .... but cataclysmically desirable...”) he develops a camaraderie with the audience who’re all in the conspiracy of absurdity together. He could be Derren Brown the way he gets grown-ups to stand and flap like a kittiwake, divide themselves into competing choirs, bellow refrains, mimic his chorus lines. I can’t imagine anyone else getting away with it. He puts his audience in touch with the child within. It’s engaging, innocent and uplifting in a sherbert-dip type of way. Good clean fun. The audience demands an encore....and gets it.

Off stage John Hegley willingly hangs around to sign autographs or have photos taken. He’s concerned he’s missed his train to Liverpool (a school gig in Crosby tomorrow). He remembers seeing Hovis in Wonderland at Latitude in 2008: “You stopped me in the camping field and asked me if I was going to see it.” For a man with a busy schedule, who locked himself out of his house earlier in the day and is now travelling around the country sans performance gear, it’s a startling indication of his clarity of observation and memory.

Matt Panesh finished the night with a rapid open mike slam, introducing five performers, each given no more than three minutes to wow a solitary judge. It was a suitable showcase of the strength and breadth of performance poetry in the Greater Manchester area. As we used to be able to say before the Olympic legacy era, they were all winners in my eyes. Matt must take credit for bringing John Hegley to Manchester. His foresight paid off and he hopes to follow it up with other guest nights in the new year. Meanwhile John Hegley will return to Manchester University’s Martin Harris Centre on 9 February 2013. No I haven’t a clue where it is either but keep an eye on the Write Out Loud Gig guide nearer the date.

◄ 'Every butterfly knows that the end is different from the beginning'

'A pool of intermingled wings and bodies' ►

Great review Dave - I so regret not being able to make it! It sounds like a brilliant line up and a great evening.

I've only seen Jackie Hagan a couple of times - but loved the subtlety of her poetry and performance.

As for John Hegley - I like the way his poetry entertains. I hope his next gig does appear on WOL guide.