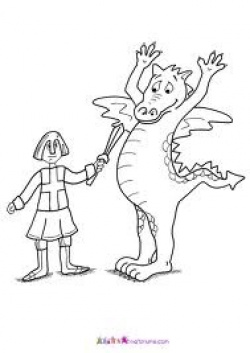 Well it's that time of year when slight spasms of patriotism spring forth from the rusty breast:-  April 23.

Hack, hoping for scoop in the village,

Of a beast bent on rapin’ and pillage,

‘Yeah, he sorted that dragon, by George!’

Which couldn’t be further from t’ truth,

Our Cecil were cowrin’ and timid,

He daren’t even swat flies as a youth.

Reporting were poor in Middle Ages,

A groat for a month were t’hack’s wages,

As an ‘erdsman he'd lost every donkey,

And all of his tiles slid and crashed,

Daub and wattle, slapped on all wonky,

Made a tradesman that wasn’t a splash!

What was it that he could do best?

At odds with careers he went looking,

In the general direction, Southwest.

Late morning he heard in the distance

Clear cries of a lass in distress,

He asked if she needed assistance,

Which she might, by the look of her dress.

She pointed, hand shaking and levelled,

Then sensed beast’s hot breath by his side.

Made him realise just what he could be.

Would suit him right down to the ground,

And be far easier than daubin’ at sticks,

He were chuffed, his new job were found.

But the sweet damsel’s voice he were hearing,

Made him think that he’d best reassess,

Yon dragon’s but small, not worth fearing,

And he could do with a girl’s soft caress.

And since he were hiding in t’ thicket

Where smith sweated in hot but-and-ben,

Those fine weapons he forged were the ticket

To transform this event, there and then.

First things were a sword and a lance,

This blacksmith, a true dragon hater,

Were right man to grant our lad his chance.

And since history must run-out its course,

Soon our lad, on that nag, proudly sat.

With lance under arm and sword in his belt,

As the smith hid his chuckle quite well,

Brave lad trotted forth to where dragon knelt

As it sniffed at the pale rider’s smell.

Our hero were unused to charging at foe,

And the smirk on the bold dragon’s face.

Lad did his best but slid off to one side

And fell with his lance in the mud,

The smith in his hide, he very near cried

As our hero still failed to draw blood.

Who wrestled to free his stuck lance,

The blacksmith’s crude laugh upset him a tad,

Same as damsel’s, when she peeked a glance.

This myth doesn’t note that the dragoness made

Up a deal so the lad came out top,

Who could well be the pick of the crop.

Rumours were rife of a fight tooth and claw

That saved damsels, from what dragons do,

He used all his skill so he’d not reveal

That his first name was not George, nor Stanley,

But parchment of birth gave the name that was real

And you can’t say that 'Cecil' sounds  manly!

With all the furore after he beat the beast,

From the reward he very near fainted,

Instead of an honorary degree gala feast,

As the tabloids print things their own way,

Next headline he read in the "Anglo-Express":

Bit of an epic tale - the sort a wandering minstrel might spin. Worthy of the occasion Yvonne.

I do love these monologues, so rich in historical fact and integity.
I always thought it was a bit hard on the dragon.
Our local pub, the G&D, has a picture of him lancing the dragon while in the background this bint stands tied to a pole awaiting her fate.
First you look at the bint; then you look at the dragon's claws; then you think, "How could he tie knots?"