Competition closes in 15 days, 12 hours. Get details and Enter.

Welcome to the city Pt 2 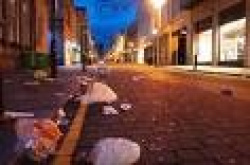 Welcome to the city
city of angels
of demons
of men and women
rapists,
killers,
con artists,
scheming fraudsters and intelligent drug dealers
they all share a secret
they were once innocent
as was the city
before its beauty was discoloured
her purity stolen by thieves of the night

Can you distinguish between the smells of a quiet night and a night of restless ruin?
wander her streets alone with your eyes closed
see her trueness underneath the night sky
the day quietly tucks away the truth under the curtains of her stage
at night the stage comes alive
a theatre for the insane
do you know the script?

scene 1
a prostitute falls in love with the night

scene 2
the night is unfaithful

scene 3
rescue the damsel in distress

The memory of a lost child looms like the black death
people leave
people return
buildings stand like giants
frowning at the machines who destroy the earths shield
the doting mother sees her children to the school gates
leaving for her part time job, her body pays the bills
her sex puts food on the table
who are her heroes? who are her villains?
you have seen the beauty of its art
the architecture that touches you as you walk past
you have seen the used condom lying next to the take away carton

the streets are yours to own
do not allow the straight jacket and padded walls to cause you harm
lie beside freedom, faithful freedom, lie with her in your untouched corners

I think there's some great lines here but maybe a bit too much. Are you writing part 3? if so maybe all the last stanza should be in that. I like the idea of a 3 part thing if thats what you're planning but with the last part a kind of reflection if you know what I mean.

As I said though I love some of the lines so maybe look at the format? any help? Jeff

Richard,
I liked all of this apart from the first verse which just seemed to be an intro to the rest of the real and dirty poem.

The last 6 lines of the second stanza don't seem to belong there.
The whole of the third stanza, i just can't contemplate. It's out of focus, if that makes sense.
Then i picked it up again after that.

It is meant to be treated as an individual poem from the first one. I think I will have to come back and re-think this maybe. Where did you get lost in particular?

Hi Richard,
Sorry, but you totally lost me with the changes you made to this poem.
There's still some great sections but somehow i feel the plot's gone