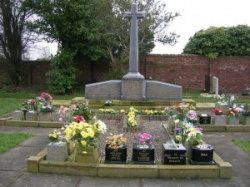 In mid Forty Four came the turn of the war;

Our troops had advanced up the Seine,

And Hitler withdrew as the allies pushed through,

Growing strong since the D-Day campaign.

Jim thought of his boys as he worked the convoys

And patrols in the mine ridden sea.

Not sure if or when, he would see them again,

Back at home where he longed to be.

In a town on the Fylde, Agnes finally smiled

As she heard that her Jim would return.

After months without news of the ships and their crews

Things had finally taken a turn.

On the twenty third of August they heard

That Paris was soon to be freed.

The day started bright for a U.S. test flight

And the two planes came up to speed.

The Lancashire base was warned of the pace

Of a storm moving up from the south.

From all the reports, they’d agreed to abort

As they searched out the dark Ribble mouth.

They heard one airman say that they must turn away

As suddenly day turned to night,

For the other plane’s crew it was too late, they knew,

As the storm clouds shut out the light.

From out of the black came an ungodly crack

As a fireball of lightning struck.

The huge burning plane roared on down through the rain

‘Till the wing hit a tree and broke up

The Sad Sack Café was just carried away

As the great metal carcase swept past.

Further over the road it was seen to explode

As the school took the brunt of the blast.

The wreckage became a huge ocean of flame

As rescuers battled the blaze.

With increasing dread they recovered the dead

In a mission that lasted for days.

Of the children inside, some thirty eight died

And the grim news seeped out through the nation.

As they mourned for a lost generation.

So poor Jim returned, as soon as he learned

That his young son had died in the school.

The direction of fate can be cruel.

Can you close your eyes tight and imagine the sight,

Can you see parents left standing torn and bereft?

Can you feel the tears start to flow?

There were many who tried to understand why,

And questioned their faith every day.

And some would hear screams evermore in their dreams

Now a place to reflect and pay their respects

Marks the grave where the victims all lay.

A memorial cross tells the world of their loss

When the dark angel passed by that day.

◄ The Oyster and The Whelk

Thanks for the comments. Nice to get some feedback after all this time.
Dave

Good to be able to read the words Dave,

Well constructed and moving - wonderfully read at the Tudor.

nick referred me to this, dave.

it's excellent stuff. deserves to be published defo.

powerful stuff Dave. I have a big interest in aviation archaeology, ww2, history and related things. ive written similar poems and visited crash sites including a B-24 over the moor from Dovestones, Greenfield. I never knew of the incident in your poem, ill research it. your poem brought it to my attention. thanx.

I know this isn't cutting edge poetry but it is a true story. Agnes and Jim were my grandparents and their younger son David was killed in the crash in 1944.