Rallying against the invader: anthology of 100 Russian anti-war poems is launched 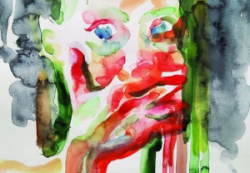 An anthology of 100 poems by writers in Russia, Ukraine and the Russian diaspora expressing their outrage and disbelief about Vladimir’s Putin’s invasion of Ukraine has been published on the first day of 2023 by Smokestack Books. The anthology has been collected by an international group of poets and translators for the Kopilka (‘Piggy-Bank’) project, aimed at collating poems about the war. In an interview with Write Out Loud, editor Julia Nemirovskaya, pictured, a Moscow-born poet and author who emigrated to Sweden, and now teaches at the University of Oregon in the US, said: “When the war started, I was distraught, to say the least. It was very personal for me on many levels. My husband’s family is from Kyiv, whereas our oldest child lives in Moscow. I didn’t know what to do but I needed to do something … 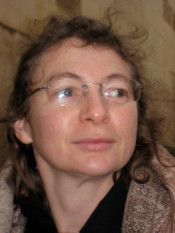 "I have been in contact with the poets, sometimes on a daily basis, and I realised the publication was their way of rallying against the aggression, and they really wanted their work to be translated and read by many people. To begin with, even placing an anti-war poem on one’s Facebook page is a statement that requires courage. Today it can be safe, tomorrow become a testimonial in the courts. The situation is constantly changing.”

Tatiana Voltskaya is a Leningrad-born poet and journalist. She left Russia after the invasion of Ukraine, and now lives in Tbilisi, Georgia. Her anthology poem talks of a grandfather’s second world war medals, earned during the siege of Leningrad, now “tarnished” by the current war in Ukraine: “I hear your voice, Grandad. You say: / We died around Moscow – why? / For a Russian man to come, by and by / And widow a Ukrainian mother?/ Cain, Cain, where is Abel your brother?”

Poet and translator Galina Itskovich was born in Odesa, and now works as a psychotherapist in New York. Her poem ‘Crisis Therapy’, denounces a “hell-load of sadists … these orcs”. In another poem, ‘War is a Train’, an elderly woman is confused and thinks she is back in the second world war, during the German invasion of the Soviet Union in 1941 (“war belonged back in her childhood”). The poem ends:

don’t continue this saga into Monday,

don’t live in fear of Tuesday,

so that I’ll never have to be born

to encounter your own terror,

on the faces of the kids just brought out of Bucha.

Eugene Kluev, who moved to Denmark in 1996, feels Russians have lost any moral place in the world: “I’ve lost my right to have a voice, a vote: / I’m Russian.” Olga Levskaya, who teaches in Siberia, writes about misuse of the word ‘peace’: “Peaceful planes glide in formation like geese, / tanks jingle peacefully. / Someone is peacefully murdered for peace.” In ‘Don’t Kill’, a poem of savage irony, Julia Pikalova lists Orwellian state propaganda, language turned upside down: “What we do to them we do as a friend.” She was born in Moscow, and now lives in Italy.

All the poems are printed in Russian, with the English translation alongside. The translators are Maria Bloshteyn, Andrei Burago, Richard Coombes, Anna Krushelnitskaya, and Dmitry Manin. The book's cover image is by Maria Kazanskaya.

Interview: 'When the war started I was distraught'

There has to be someway of expressing disgust or despair John. What better way for poets than through poetry? I somewhat disagree with your viewpoint although I know there is much to unpack within it. One voice is lost in the melee of propaganda but individuals need to know they are not alone in their feelings. Many voices may contribute to a counter view. I am tempted to think of the Anti Vietnam movement from within the USA. I am, also conscious that it is eaasy to bleat from the armchair. Any Russian who speaks against this invasion is a hero in my simplistic view. Thanks for bringing it to our attention Greg.

This a wonderful initiative. So many of the poets must be pulled in different directions by ties of family, friendships etc, yet all of them seem to be united by a revulsion to war. For many, it is a genuine act of courage to write an anti-war poem and we should salute everyone concerned with this anthology. I look forward to reading it.

Some interesting poems and perspectives but poetry, like philosophy, leaves the world as it is and changes nothing.

The task you have chosen, of struggling for peace through your writing is a sacred one.

The safety of the whole world, and that of our children lies in your hands heads and hearts.