'When the war started, I was distraught' 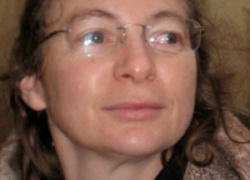 I interviewed the editor of Disbelief, Julia Nemirovskaya, by email about the anti-war anthology - about how it came about and evolved, the risks of speaking out, the dangers some writers still living in Russia might face. I found her answers fascinating – and also, very moving.

How did you become involved in this project?

When the war started, I was distraught, to say the least. It was very personal for me on many levels. My husband’s family is from Kyiv whereas our oldest child lives in Moscow. I didn’t know what to do but I needed to do something. I had taken part in Moscow literary life in the 1980-2000s reviewing Russian poetry for the Bonniers literary magazine in Sweden and several other journals. Most of my friends have been poets, and it occurred to me that I was in a position to collect their poetic responses to current events. In February, I wrote to my Russophone poet friends in Russia, Ukraine, Uzbekistan, Armenia, Georgia, and several other places in the diaspora, and asked if they had written anything about the war. Some couldn’t write at all because of the shock, others sent me their poems for safe-keeping. Later I copied, with the authors’ permission, all I could from Facebook, Telegram, and other social media. At that time as well as now, it had been unclear whether poets risked anything by having their work in the collection. Therefore, I often put only their initials underneath the texts and kept the poems in a closed Google doc file - giving access only to the people I knew. I called the file Kopilka (Piggy-Bank).

In a few weeks, a group of US, UK and Canadian translators - Andrei Burago, Richard Coombes, Maria Bloshteyn, Anna Krushelnitskaya, and Dmitry Manin – had translated about a dozen poems each into English; Christine Zeytounian-Belous, Maria-Lousa Bonaque and Elido Rimaz had translated several poems each into French. After two months, it became clear to us all that it was time to publish collections based on Kopilka. We already had more than 100 poems translated into English and French. Christine published 16 poems from Kopilka in French, with Éditions Carqactères, and the collection was featured in Le Monde. We got several offers from various publishers and chose Andy Croft, a fine poet and publisher of Smokestack Books, UK. He impressed us with his knowledge of and love for poetry. We also liked the fact that the price of the Smokestack book would stay within ten pounds. We have been very happy with our decision.

How did it differ from other anthologies that you have been involved in?

I was involved in the other anthologies only as a poet. Our anthology features 100 poems, I think Massimo Maurizio’s Italian anthology has about the same number of poems, whereas Christine Zeytounian-Belous published 16. There are also several anthologies in Russian. Some online publications like ROAR (by Linor Goralik), Viewpoint (by Aleksey Karakovsky, still living in Russia), and East-West Literary Forum (by Nina Kossman) can be seen as anthologies because they publish war poetry on a regular basis. Each anthology represents a different way of selecting texts. Some editors feature only a number of established poets, others look for an immediate response to the events by all poets including some lesser-known ones. Since Kopilka is a resource where all kinds of poems are collected (it has thousands of pages of poetry now), I thought it would be best if the translators chose the poems they liked and turned them into English poems in their own right. Each translator has their own style and preferences but when they like a poem, they make it their own (in a good sense). As a result, I cried each time I edited the manuscript – the poems and their translations are very powerful.

How many of the contributors still live in Russia?

When we submitted the manuscript, the majority of poets were living in Russia. We had many poems signed by initials. By the time the book was coming out, fewer poets were living in Russia. The first wave of emigration was in March and the second in September, after the mobilisation orders. We had to change the short bios at the end of the book many times. Not only because the poets emigrated, they also constantly changed their location (Yerevan-Istanbul-Berlin, for example). Of course, several poets are still in Russia, I would say roughly one-fifth of the 70 poets featured in our anthology.

Have you heard of any problems that any of them may have faced, as a result of being part of this project?

None of the poets has faced any persecution because of their participation in our project. When Kopilka and the anthology were featured in the Guardian, the Insider, and other popular media, we “locked” Kopilka and made sure no names were mentioned in the material. I have been in contact with the poets, sometimes on a daily basis, and I realised the publication was their way of rallying against the aggression, and they really wanted their work to be translated and read by many people.

How brave do you have to be to contribute to such a project, and still remain in Putin’s Russia?

To begin with, even placing an anti-war poem on one’s Facebook page is a statement that requires courage. Today it can be safe, tomorrow become a testimonial in the courts. The situation is constantly changing.

Is there anything else you’d like to say about this project? What are your feelings about it?

As I had mentioned before, the anthology was constantly changing, and I am thankful for Andy Croft’s patience and understanding. For example, at first it was cool to be against the war but soon a dove avatar on Facebook equalled an anti-Ukrainian position – Ukrainians wanted to fight till they regained all their lands so offering them peace was a betrayal of their cause. This and other issues forced us to change the introduction in the beginning of the book several times. Every editor of an anti-war anthology becomes a part of the collective effort to defeat evil. Therefore, we all are involved in one big project – as poets, translators, editors, and anyone who can express themselves artistically. Moreover, poets and artists often feel that every artistic piece is their own and every one of their pieces is everyone’s. You may say it’s some kind of collective magic or spell. Poets cannot do more but who knows, maybe it’s already a lot.

A very interesting interview which describes the whole process of putting the anthology together, and the steps that were needed to safeguard everyone's safety. The fact that anti-war poets are leaving Russia as we speak, while those who remain have to remain anonymous, speaks volumes for the sad situation that we face. My congratulations to Julia and everyone involved in this project.