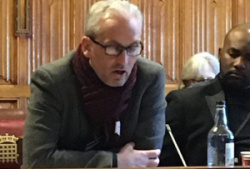 Peace poet Antony Owen read a poem from his collection The Nagasaki Elder at the culmination of a meeting at the House of Lords that looked at how nuclear disarmament and peace education should be taught in schools.

A new survey from the Nuclear Education Trust shows that 93 per cent of teachers do not agree that nuclear disarmament education is too political to be taught. Most teachers believe students should learn about the humanitarian consequences of using nuclear weapons, the Survey of Nuclear Disarmament Education found.

At the meeting at Westminster on Tuesday were Fabian Hamilton MP, shadow minister for peace and disarmament, Jenny Clegg, Nuclear Education Trust trustee, Helen Griffin, Quaker and peace education officer at CND, and Ellis Brooks, peace education co-ordinator for Quakers in Britain. Peers, MPs, academics and thinktanks joined peace education and advocacy practitioners to look at the role of education, especially in schools, in a time of increasing nuclear tension and public concern.

The survey recommends that schools, trusts and education authorities should ensure funding is available to train teachers in nuclear disarmament and peace education, and that student teachers should receive this training early in their careers. The meeting examined the benefits of more understanding of diplomacy and nuclear disarmament when Vladimir Putin's recent nuclear threats have raised fears that so-called 'tactical' nuclear weapons could be used in Ukraine.

Paul Parker, recording clerk of Quakers in Britain, said: “Teaching children about the impact of nuclear weapons is vital if we are to continue to prevent their use. War represents our failure to resolve our differences by peaceful and amicable means; teaching children listening skills, non-violent resolution of conflict, mediation and respect for difference lays the groundwork for a peaceful, just society." Quakers in Britain are working with the Peace Education Network on a 'Teach Peace Secondary' resource, which will include a nuclear lesson from Scientists for Global Responsibility.

Afterwards Antony Owen said that he had been “proud to make a stand at the House of Lords for our future generations”. His collection The Nagasaki Elder was published after he went to Japan to talk to survivors of the Hiroshima and Nagasaki atom bombs. CND Peace Education (UK) selected Owen as one of their first national patrons in 2015, and his poems feature in a national CND peace education resource to schools.

'When the war started, I was distraught' ►

John F Keane, the purpose is to break a cycle by introducing more in depth lessons of nuclear weapons. The most dangerous weapon is the trigger, the man and then the weapon. TikTok should not be our teacher on nuclear education. It might be too late god help us all

As if poetry or UK teachers would or could stop Putin using nuclear weapons if he wanted to.

A fine poem from a fine man.