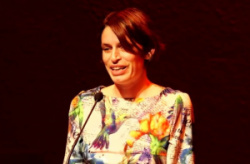 Kim Moore has won this year’s £10,000 Forward prize for best collection for All The Men I Never Married, a book that first emerged from a PhD thesis in Poetry and Everyday Sexism at Manchester Metropolitan University. She has said in an interview: “In my PhD, I wanted to examine my own experiences of sexism and what happens when you put the white space of a poem around that experience. The strange thing was that the things I was thinking of as just silly incidents that didn’t really mean much began to change as I was writing about them, and ‘sent’ myself back there …  When I turned them into a lyric poem, they suddenly began to present as being quite dark and upsetting.”

The book was reviewed enthusiastically last year by Write Out Loud’s Greg Freeman, who concluded: “I will be surprised if it is not shortlisted for an award or two. It certainly should be.” After Monday night’s readings by shortlisted poets, she was initially overcome at being told of her triumph, saying: “This means everything to me.”

The other collections shortlisted were Pilgrim Bell by Kaveh Akbar, Sonnets for Albert by Anthony Joseph, Cain Named the Animal by Shane McCrae, and The Illustrated Woman by Helen Mort.

After 30 years of the Forward prizes, the ceremony was held outside London for the first time, at Manchester’s Contact theatre. Organisers also took the opportunity to announce a new prize category for next year, that of best performance poet. 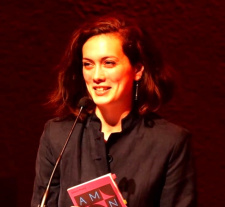 The Felix Dennis prize for best first collection went to Stephanie Sy-Quia for her collection Amnion, a debut collection of poems that questions the roots of migration and colonialism, charting what it means to grow up in a family divided by geography, history and language. She read a poem about a posh private school in England, skewering pupils and parents in a cut-glass, subversive voice.

Also shortlisted for best first collection were Rifqa by Mohammed El-Kurd, The English Summer by Holly Hopkins, Some Integrity by Padraig Regan, and Bless the Daughter Raised by a Voice in Her Head by Warsan Shire. 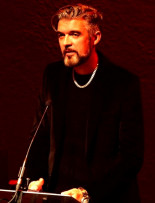 The winner of the best single poem prize was Nick Laird for ‘Up Late’, a long, painful and poignant elegy charting his father’s death in hospital from Covid. Receiving his prize, Laird said: “My father wasn’t a bookish man. I think he’d be bemused by this.”

The other poets shortlisted for best single poem were Louisa Campbell for 'Dog on a British Airways Airbus 319-100' - she enlisted audience participation for the performance of her poem, and also brandished a large dog's head; Cecilia Knapp for 'I’m Shouting I LOVED YOUR DAD at my Brother’s Cat'; Carl Phillips for 'Scattered Snows, to the North', and Clare Pollard for 'Pollen'.

The audience was welcomed by Contact theatre’s artistic director and CEO, Keisha Thompson, who spoke of her pride as a Mancunian that the Forwards had come to her city, with a short film celebrating Manchester’s poetry heritage and contemporary strength also shown.

Forwards founder William Sieghart ended the evening by appealing to the audience in the theatre and beyond, such as those watching the livestream, to consider donating to the Forwards, to help the organisation continue its work of supporting and promoting poetry.

Brutality is inexcusable whatever and wherever its source. No
one who has dealt with it can or would make any excuse for it.
Whether it falls solely within the definition of "sexism" is a
matter for examination and debate. The culprits are more
likely to be blameworthy via their basic sociopathic leanings
and inclinations, regardless of gender. This enables their
attacks on those weaker and more vulnerable,...with control
and a disregard of suffering foremost examples of their mental deviations towards humanity. They "select" those who can
offer least resistance - in certain cases also driven by lust and
opportunity - the latter exacerbated by cunning and planning,
disguised via various convincing ploys that makes them so
dangerous. One afternoon as custody officer, I sat with an
escaped inmate awaiting return to a prominent mental institution. Our conversation was nothing if not enlightening
as an example of the "butterfly" ability ol a mindset to flit from
one "escape" from responsibiliity to another. When his escort
arrived, he.paid me the dubious compliment of how much he
had appreciated my understanding. An object lesson for me
in what may be termed "lateral thinking" when confronting
and conversing with guilt and all its ways and means of living with the consequences. A lesson still vivid in my 79th year.

I have spent the last seventy-four years dealing with a wide range of society.
It’s called “living in the real world”…and a horrible world it is for some poor souls who I’ve met along the way.

Three or four years ago, a young woman in her late teens serving in the pub, was telling me about her “relationship”.

She had been beaten black and blue and she showed me some of her bruises.

Then she showed me the patch about three inches wide on the side of her scalp, where a clump of her hair had been torn out.

I later described this incident in a WOL blog post, and one of the responses I got was:
“Well she could have walked away from it”.
Just a few days ago I was told that her assailant had burned her house down.

I have to ask the question:
“did this person get the prompt help she needed from the police / social services, or were her concerns dismissed because she was suffering from an “-ism”?

Having spent thirty years dealing with the widest range of
society, its strengths and weaknesses, I came to understand
the importance of keeping an open mind about the variety of
attitudes put forward while trying to sort out which version of
the offered reality was actuality. People love to have their
opinions, convictions and prejudices validated by belief and praise, don't they?
My approach to sexism (and other familiar "isms" of today) is
certainly as valid as your own. If that makes me "ill-informed",
should I assume I'm in good company?
Compliments of the Season.

Interesting that an ex-Met police officer feels qualified to offer an ill-informed opinion on sexism - have you read the book, MC? - even after the appalling murder of Sarah Everard. If you had read the book, MC, you would have seen that the 'ism', as you term it, is examined pretty rigorously. Here's the link again to my review, at least, just in case you didn't bother to read it before posting your comment https://www.writeoutloud.net/public/blogentry.php?blogentryid=118816

Sexism? Could well be argued that it is "selection by dismissal
of qualities or abilities on offer". Like other "isms" it demands
rigorous examination when raised. But £10.000 is consolation.😇