2022 Trev finally gets to Texas: A long time comin': Part 3 Austin to Midland

by Trev the Road Poet 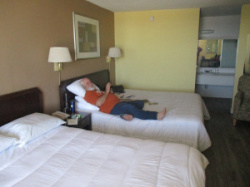 Image: Chris relaxing at the motel prior to goingto the gig at Destination that evening, we only dedcide to make it a twosome the afternoon before setting off. We had a great night at Destination and a free meal.

Pick up Chris along the way, decision was made yesterday

To Midland for my first gig, my tour would keep on track

I’d carry on he’d make his own way back

Off we went with eager intent

Chris sleeps an’ I drive seein’ more an’ more

Scenery an remember drives before

Hoes not in vain, it feels good to be drivin’ that familiar route again

Breakfast over an’ done once more we run

Westward over plain an’ through town I remember to slow down

A career choice heh made, served with his local Fire Brigade

Like me he’s retired and art writin’ was inspired

Before we arrive at the motel, things have gone alright

An’ we can relax before the gig tonight

And yet again I didn’t get propositioned

An’ it’s my first time sharin’ my rhyme

Been waitin’ a while but it’s here at last

Read by the one billed as Trev the Travelling Poetry Troubador