by Trev the Road Poet 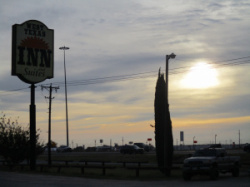 Image: Early morning in Midland shortly after sunup, outside the motel whjere I was staying, it was cold and would be for most of the time I was stayng there.

I shared my rhyme, in Midland for the first time

This morning it’s clear with a chill in the air. The cold winds still there

So breakfast had than I discover, the motel’s an exception

The got a guest computer in reception

So, soon what I need to be done will be done before to Lamesa I run

But first see what Chris has planned for today.Is he gonna go or stay?

Decides he gonna go for his original flight,

Say’s he feels homesick, so not stoppin’ another night

So we bid goodbye, shake hands an’ I’m on my way

To Lamesa on another cold Texas day

Get the heater goin’ get the music flowin

Music an’ song help the journey along. Drives goin’ fine I see a familiar skyline

Soon I’m there an’ make my way to see. Where the permaculture Center used to be

Things ain’t happened for the good, damaged by tornado an’ flood

Not there but elsewhere an’ I hope to be there

Pictures taken an’ more for my next poetry score

An in the main, I’m thinkin’ it’s great to be back again

Phone number give her a call before we meet

They’ve gone out for something to eat

I call we talk, I smile when she says go in an’ rest a while

I do, soon they’re back, Connie, Dusty an’ one more

Jessica whom Dusty married 10 months ago

To go look round so out I’m bound

He politely tells me what I done wrong

I show my passport an’ license, apologise, don’t make a dance an’ song

We chat a short while then he lets me go on my way,

Saying “Drive carefully sir an’ have a nice day”.

Drivin’ with care, makin’ it plain, I don’t want to get stopped again

The old cotton dryin’ kiln, one of the towns Firfeightin’ team

A memorial courtyard, the Old Skyvue, afternoon’s goin’ like a dream

After Forrest Park transfer to disc at the Library

Then back to Connie’s before dark

An’ Me an’ Connie take the time

Sings Jolene,  an’ sings it well.Me an’ Connie applaud sayin’ it was swell

Then we hug an’ I drive off into the night

Back to Midland thinkin’ “Yup today sure has gone alright”

76) Another day cold an’ grey task number one, get my laundry done

I think of Chris who went home last night,

Send him a text sayin’ I hope he got there alright

Breakfast an’ laundry done so my way I’m makin’

It’s cold as I’m walkin’ round

Seems like most of the animals have gone to ground

Takin’ pictures as I walk along the trail

I see something with long legs an’ a tail

Walkin’ slowly it disappears into thin air, I turn a corner an’ it’s sat there

What it is I still can’t see, my view’s blocked by a tree

Then it stands and moves a pace. I’m lookin’ at a wildcat face to face

Reach for my camera but to my dismay, casually it walks away

No photo but I’ll always remember

Comin’ face to face with a wildcat in Texas in November

77) Emails an’ other stuff done, getting colder, no sign of the sun

Currently 40C  a bit to cold outside for me

An it’s a shame, looks like tomorrows gonna be the same

An, my next gig can’t come to soon, It’s at Denny’s tomorrow afternoon

Up to 13h degrees higher, I hope he ain’t a liar

Gig at Denny’s this afternoon, can’t come a moment too soon

An’ but for the cold things is goin’ real fine

Gonna go to the Preserve again, hope it’s not in vain

An’ I see the wildcat an’’ put it in rhyme, I got his picture this time

79) So to the Wildlife Preserve I went, more time spent

Wandering the trail but to no avail

Soon I’m snappin’ away, at things I missed yesterday

An’ givin’ the time of day, to others passin’ my way

Sure was good in the main, sadly I never saw the wildcat again

But I’ll remember an’ not cry

The day Wildcat an’ Poet looked each other in the eye

But we had a plan in reserve

Me, Kat an’ Bonnie, not quite a poetry storm

But at least we were where it was warm

An’ after a brief lull, we recited as if the room was full

Readin’ from the heart., our poetry art

So time weren’t spent in vain, we went round again an’ again

So good was the time we spent, we were all glad we went

After breakfast sky was grey, sun had gone away

Seemed as cold as yesterday

To KCKM Radio hope to go down a storm

Been told though to wrap up warm

Got the heater goin’ an’ as usual Country Music fllowin

Ain’t gonna be nifty gonna drive at around fifty

Turn the heatin’ up stronger, keep warm for longer

I’m almost there, soon be on air

The KCKM aerial in front of me

A few minutes later I’m there, go in an’ get ready to go on air

83) Eleven-o-clock and we’re away, Dial an’ Deal gets underway

I’m introduced an’ work ready to be produced

I talk about where I’m from an then some

About my roam an’ why I call Texas my spiritual home

The calls come in Laurel an’ me talk in between

An’ the time I’ve put it all in rhyme

Goin’ on to say, what I’m doin’ tomorrow on my last day

Then that’s it for Dial an’ Deal

Soon I’m there to enjoy the thanksgiving fayre

All for free in the name of charity

Volunteers working hard no doubt, takin’ it to those who can’t get out

Deliverin’ to those that can’t get out

All welcome on the day no one turned away

An’ we, also do it for free

An’ once more I’m on my way

84) Away I run in the afternoon sun

Thinkin’ of ideas for a rhyme, then decide it’s sightseeing time

Saw a sign that read, Monahans Sandhills State Park ahead

Seemed a good way to spend part of the day

Enjoyin’ the silence an’ solitude, sun put me in a better mood

So I can be, enjoyin’ some time for me

Feelin’ the sun on my bare arms among natures barren charms

Hit the road once more an a short while later

Something I ain’t seen before an;’ want to see more

Info so people know what happened thousands of years ago

An’ how it was discovered and part of it uncovered

What else they found when they drilled and excavated the ground

An I’, takin’ more photos so folks can see it when they look

GPS again comes into play an’ gets me back

Have a shower an’ decide what to do

Dress, look out again frost on car no surprise it’s -2

So back to my room let it rise some more

While I compose another poetry score

I saw the wildcat but once again he ain’t there

But I’ve enjoyed a walk round in the November sun

Now away I run

Then after some good ol’ Texas chow I thought “Now

It’s time to run down I-20 where I seen the cheapest gasoline”.

2022 Trev finally gets to Texas: A long time comin': Part 4 Midland to McAllen ►