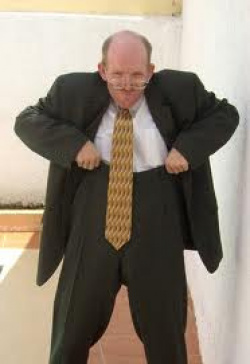 It isn’t that I hide from the Grim Reaper’s scythe every day; it’s that bodily functions I used to take for granted start to mock me.  And I’m not talking about the expected ones – thin and greying hair, ballooning waistline etc but other equally unwelcome but unanticipated changes.

Toenails, for instance, have become hard enough to repel an assassin’s bullet.  Ankles and knees unaccountably swell and recede, swell and recede.  My gazinta, which I asked at one time to fulfil only two functions, now struggles with both, despite, that is, the increased demands put on it by my bladder.  I’m starting to sprout pre-cancerous sunspots and require the attentions of a dermatologist.  How long before I need a chiropodist and an undertaker?

When my daughter saw us one morning arranging our tablets at the breakfast table, she said “Blimey!  You’re like proper old people!”

Most alarmingly, I have become invisible.

◄ THE LINE AND SQUARE

I'll go on snapping my whip for a few more months.....

You’re just a whipper-snapper, Stephen. I had my 70th 6 months ago. And thanks for the Like, Stephen A.

JC - May the advice you receive continue to stand you in good
stead. I dealt with docs on a regular basis when I was the
custody officer at a frantically busy central London police station.
It was a salutary experience in many ways but it also taught me
to be ready to challenge "received wisdom", not least when they
would regale me with their own experiences. Be aware is a
close approximation to "Beware" and self-awareness comes
into the equation as a useful result. But above all - AVOID STRESS - the biggest "silent killer" that can materialise in all
medical assessments. Bon chance, mon ami!

Made worse by the Arse topping the shop at the minute no doubt! I'm glad I switched to netball.

Coeur de lion, Graham. Although it’s been bumping a bit from conceding first every bloody game!

Diuretics don’t help a good night’s sleep but do keep the kidneys in shape if you have any form of cardiac issues.

I’m sure you’re right about diet and liquid input, MC. I rarely drink anything after 6pm and it makes for a less interrupted night’s sleep. But,equally, I have the good sense to take the advice of medical professionals who have studied and practised their trade for several years.

Take heart - and keep the latter young! The drawback with
toe nails is that with age the arms never seem long enough
to reach them - even with those designer scissors that are
advertised in the endless health product brochures that start
appearing as if there is a crystal ball in common ownership by
those same concerns. Urology is an "ology" that takes a
concentrated form in GPs' mindsets with regard to older male patients and needs a detached assessment involving a sensibly researched diet and liquid input. I'm not sure that modern docs
have the same interest in a patient's own view of his/her
condition as they have of what they expect to meet, combined
with what their computers tell them - the version of "face to
face" medical treatment for today's brave new world! 😐.