Celebrating WB Yeats in London: artwork to be unveiled 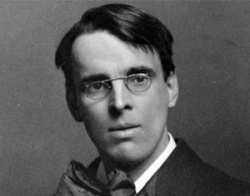 “Enwrought with golden and silver light,

…Tread softly because you tread on my dreams”

(‘He wishes for the Cloths of Heaven’)

Seven years ago, at a night of poetry in west London to celebrate the renowned Irish poet WB Yeats, Chiswick resident and poet and critic Cahal Dallat spoke of a campaign to provide a permanent memorial, in recognition of the fact that Yeats spent much of his life in London, saying: “We don’t make enough of him here.” That campaign will come to fruition early in September with the unveiling of ‘Enwrought Light’, an artwork by Conrad Shawcross. The artwork will be unveiled by poet and former archbishop of Canterbury, Dr Rowan Williams.

It is inspired by Yeats’ poem ‘He wishes for the Cloths of Heaven’, and is 50 yards from the poet’s childhood home, by St Michael and All Angels church, and by the path Yeats walked daily to school. Nobel prizewinner Yeats wrote his celebrated poem ‘The Lake Isle of Innisfree’ in Chiswick’s Bedford Park. The free unveiling event will be on Tuesday 6 September at 4.30pm.

Cahal Dallat said: “Our first Yeats evening here was in 1999 when the Yeats/Bedford Park connection was relatively unknown, even to literary people. Since then I've led Yeats walks around the area for Bedford Park festival, for Coffee-House Poetry and for visiting US literature groups and classes but the question always came up - why isn't there anything to mark the fact that Yeats lived here? There is, in fact, a green plaque on 3 Blenheim Road which mentions Willie plus father and brother Jack, put up by the Bedford Park Society.

“But it was so obvious that there should be something celebratory and in 2015 I decided to do something about it: Bedford Park Society were interested in focusing on the radical and arty aspects of the suburb, Embassy of Ireland were interested in the idea that a London suburb wanted to claim its Irish hero and perhaps claim what the capital, and Bedford Park's own unique atmosphere, had done for literature (and the 20th century world) through Yeats. Both local boroughs (Hounslow and Ealing) were interested, especially when I pointed out how much Yeats had been influenced by the area's questing, progressive, multicultural ethos - and the fact that the only poet writing in English and raised in Britain ever to win the Nobel prize was a west London schoolkid from a relatively impoverished migrant family!

“There's a real sense of excitement locally that it's all coming to pass. Yeats said ‘my glory was I had such friends’ and the whole enterprise has only been possible through having such friends in the worlds of poetry and drama and media, and in the neighbouring streets here in  Bedford Park as well as in Ireland and America, and others - at the Royal Academy and Irish Embassy and the Josephine Hart Poetry Hour, and IT developers and contractors and so many more ... Like lots of late 19th century thinkers, Yeats explored the idea of ‘channelling’ guides from the spirit world: not that I'm channelling Yeats, but I feel I've been channelling an incredible untapped spirit of enthusiasm for, and love of, Yeats's work and his life story, simply bringing together and giving focus to a celebration of genius that was always there and waiting to happen.”

After the unveiling, there will be a further event, The Josephine Hart Poetry Foundation celebrates WB Yeats in Bedford Park, with actors Ciaran Hinds, Sinead Cusack and guests reading Yeats poems at St Michaels and All Angels church. More details

Other well-known lines from Yeats:

“I will arise and go now, and go to Innisfree”

(‘The Lake Isle of Innisfree’)

“Those that I fight I do not hate,

Those that I guard I do not love”

(‘An Irish Arman Foresees his Death’)

A terrible beauty is born.”

“And what rough beast, its hour come round at last,

Slouches towards Bethlehem to be born?”

'My seven siblings and I sheltered ourselves inside these labyrinths' ►