The power of Yeats: BBC's Fergal Keane on the poet he takes on his travels 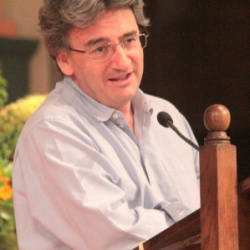 A multi-award-winning BBC foreign correspondent, whose parents were both actors and whose father knew Louis MacNeice, drew fresh resonances from WB Yeats’ ‘Easter 1916’ on Wednesday night when he read the famous poem about the deaths of “MacDonagh and MacBride / and Connolly and Pearse”, who were among those executed after the Easter Rising in Dublin.

Fergal Keane was reading his selection of Yeats’s poems and talking about the man he described as “the giant of Irish literature, in a stellar field”, to an audience of well over 200 at the beautiful and remarkable St Michael and All Angels church in Bedford Park, Chiswick, in west London, where Yeats spent some of his youth and wrote ‘The Lake Isle of Innisfree’.

The community of Bedford Park - which has been described as the world's first garden suburb - is celebrating Yeats’ 150th anniversary with a series of events masterminded by local residents Anne-Marie Fyfe and her husband Cahal Dallat. The two poets are also well known for their regular Coffee-House Poetry events at the Troubadour. On Wednesday night Cahal announced that they were launching a campaign for a permanent memorial to Yeats in Bedford Park: “We don’t make enough of him here.”

Keane, himself a resident of Chiswick, which he described as “my home, a place of sanity”, said ‘Easter 1916’ represented a time when Yeats, like so many other Irish people, was transformed from a “constitutional nationalist” by “a moment of profound psychological and political change”.  Yeats was never a crude propagandist, he said, but the poem has that “powerful rhetorical device at the heart of it” - the repeated line, “A terrible beauty is born.”

He grew up in a home of “words and poetry”, and one of the poems his father liked to recite was ‘The Wild Swans at Coole’, which Keane was said was “full of wistfulness, that sense of time passing”. Keane is steeped in Irish literature and writers, and paid due tribute to Behan, Beckett, and Joyce, before insisting that Yeats towered above them all with his ”marvellous integrity”, and his pioneering “re-imagining of Irish identity”.

The other much-loved Yeats poems he read included ‘An Irish Airman Foresees his Death’; ‘He wishes for the Cloths of Heaven’ (“Tread softly because you tread on my dreams”);  ‘When You are Old’ addressed to the great, unrequited love of his love, Maud Gonne (“One man loved the pilgrim soul in you”); ‘The Circus Animals’ Desertion’, imagining that inspiration was deserting him in old age; and ‘A Prayer for my Daughter’, which Keane said gave him and his BBC producer some comfort on their way to report on the genocide in Rwanda in 1994: “Whenever I read this, I think of my own daughter.” He added: "Yeats has come with me everywhere, in the war zones I've travelled to in the world."

Keane concluded his moving and stirring selection of poems, by singing, accompanied by Cahal Dallat on the piano, ‘Down by the Salley Gardens’: “She bid me take life easy, as the grass grows on the weirs; / But I was young and foolish, and now am full of tears.”

The first half of the evening was remarkable, too, with five batches of six open mic readers, superbly marshalled by Anne-Marie. The 30 readers each read a single poem generally inspired by or with echoes of Yeats, including one about geriatric sex. I was one of those readers – my poem was not about geriatric sex – and it was a privilege to take part in such an event.

The evening was opened by Anne-Marie Fyfe reading her short poem, ‘Kingfisher Days’, from her new collection, and which has also been published in the Bedford Park community magazine. It is about longing for the pleasures of childhood, and includes an epigraph from John Banville’s novel, The Sea: “The past beats inside me like a second heart …”

The vicar of St Michael and All Angels, Father Kevin Morris, concluded the first half by reading ‘What is it to be human?’, a translation by the poet and former archbishop of Canterbury, Rowan Williams, from the Welsh poem by Waldo Williams, a Quaker who was “addicted to peacemaking”. Fr Morris added that the evening was “a great satisfaction for me. Churches should be places of poetry.”

Anne-Marie Fyfe and Cahal Dallat will explore in a lecture at The Studio in Blenheim Road. Bedford Park, on Saturday 20 June how Yeats’s Bedford Park neighbours, through pageants and am-dram, inspired the stagecraft that revolutionised 20th century theatre. On Sunday 21 June you can take a two-hour stroll with Cahal Dallat along the walks that inspired the young Yeats.

◄ Counting down to Edinburgh: nine spoken word shows bound for the Fringe to be showcased in one day in Newcastle

Write Out Loud's Risk a Verse at Huddersfield tonight ►