Campaigners reach £134,000 target for sculpture to mark WB Yeats in England with day to spare 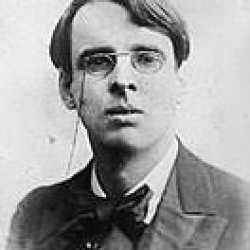 Campaigners seeking to reach a £134,000 target to erect a monument for a poet who was brought up in England and won the Nobel prize have achieved their goal with a day to spare. Ireland’s WB Yeats spent two-thirds of his young life among the London “roadways” and “pavements grey” in his famous poem, ‘The Lake Isle of Innisfree’, written in Bedford Park, Chiswick, in west London.

The Yeats-inspired sculpture by Conrad Shawcross in Bedford Park will include these lines, engraved in a wide circular stone base:

Enwrought with golden and silver light,

The blue and the dim and the dark cloths

Of night and light and the half light

The lines, inspiring Shawcross’s upward helical spiral, are taken from Yeats’s ‘He Wishes for the Cloths of Heaven’, a poem partly inspired by Yeats’s sister Lily’s Arts and Crafts tapestry work for William Morris.

The fundraising group had been seeking help for the project on their Spacehive/#MakeLondon crowdfund page. Their £134,000 phase two target covers Conrad Shawcross's Enwrought Light plus stone base, engraving, interpretive signage, groundwork, delivery and installation. The deadline was Tuesday, 20 July. 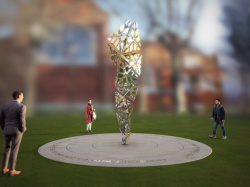 The WB Yeats Bedford Park Project is backed by Bob Geldof, who said: “Bedford Park is where the National Poet understood what it was to be impoverished, alien, exiled, became obsessed with a woman who would haunt his life and give rise to the greatest poetry of the 20th century. Surrounded by his extraordinary family and his radically revolutionary neighbours, Bedford Park whipped the beautiful young poet into the maelstrom of poetry that would give rise to a nation.”

Poet and local resident Cahal Dallat, who launched the campaign, said: "I'm not only amazed at poets pledging to make Conrad's vision a reality but at how many in the local community really want to see a poet, and poetry, and art, and inspiration, celebrated in their everyday lives."

Background: The power of Yeats: Fergal Keane on the poet he takes on his travels

Only 7% of the sought-after sum left to achieve, according to
the latest news. Success beckons!.

Today saw an email arrive about a £2000 pledge from two names from the acting profession. Getting there!!

Some of Ireland's finest have done their best work here in London.
And when this great city boasts two statues of the Scot Robert Burns,
it seems entirely in keeping with respect for the art of poetry that
Yeats be celebrated in similar fashion here in the capital.