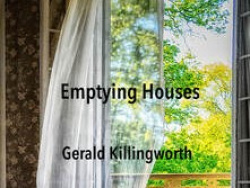 Novelist, poet and playwright Gerald Killingworth studied English at Cambridge and was an English teacher for much of his career. His four years teaching English in Athens inspired him to write a play about the Greek poet Constantine Cavafy, Days of Cavafy which was subsequently published by Methuen. In 2020, he was awarded a PhD from the University of London for his work on the Elizabethan writer Robert Greene. His work regularly appears in poetry magazines and he is part of the workshop group which organises the annual Tears in the Fence poetry festival.

Emptying Houses is a collection of 29 poems whose subjects are often to be found in the immediate or historic past. Reading Killingworth’s poems is a bit like going on an archaeological dig: you never quite know what artefacts you are going to find but when you do find them they will surprise and enthral when they are held up to the light.

‘Light is everywhere’ when the curtains have been taken down in the opening poem, which bears the title of the collection. As “the sun lays claim / to all the vacant spaces” Killingworth recounts how the transparency of light lays everything bare and eliminates the presence of the previous owner who has clearly passed on. It reveals clues about a previous life which now remains well and truly silenced. ‘Grief’ reminds us that there are no textbook answers as to how to navigate this territory, just a series of photographs to hold on to in the hope that they will console the grieving one. In ‘Tongues’, moving from human beings to languages, Killingworth reminds us that even languages are subject to change and decay. The poem itself follows an historical trajectory stretching as far back as the Ogham script .

Poems such as ‘Flint’ and ‘Specimen’ reveal an interest in archaeology. These poems surprise us with their “whorled shells”, shaped stones and human remains. There is a poem addressed to the English dramatist, Robert Greene, who died in penury in 1592.

A sequence of three poems under the heading ‘Season of…’ celebrates autumn with its echo of the opening words from ‘To Autumn’ by John Keats. Nature writing is one of Killingworth’s strong points. Here is the opening stanza:

This is a bindweed Autumn.

One leg of a garden seat goes under,

Killingworth sometimes approaches his subjects from oblique angles. ‘Pebbles’ is a case in point, a short poem containing a mix of narrative and conversation as the pebbles begin to “speak”, lamenting the fact that they have ended up in a garden and are far from the sea that they crave for.

‘Sic Transit …’, shorthand for ‘thus passes the glory of the world’, in some ways echoes the opening poem ‘Emptying Houses’: in both poems, one about a house the other about an orchard, the owners have left and there is an air of expectation about what will happen next as well as a new appreciation of the “emptiness” left now that these places have been pared down to the bone.

Two other poems that caught my attention were ‘For Adrian’ and ‘Moon Sliver’. The former is a short poem about a small boy who is lost for a moment in a dream world of his own. Not a word is out of place and, for me, it is a real gem of a poem. The latter reads like the early arrival of a poem that begins to work its way into the subconscious overnight. Both poems, beautifully articulated, capture a fleeting moment and pin it to the page.

Like John Clare’s ladybird poem, quoted at the beginning of the book, these poems are like “green grass…pearled with dew”, quiet and unobtrusive, awaiting discovery.

◄ 'Like dust their lives so small compared to ours'

Celebrating WB Yeats in London: artwork to be unveiled ►