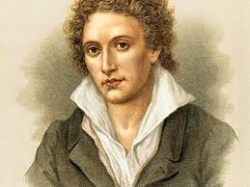 The bicentenary of the death by drowning of the Romantic and radical poet Percy Bysshe Shelley at the tragically young age of 29 is to be marked by readings by celebrities early next month. The Keats-Shelley Memorial Association is organising two events. The first on Wednesday 6 July from 6-8pm at Old St Pancras church will include poetry readings by BBC news presenter and correspondent Reeta Chakrabarti, and a short talk by her husband Paul Hamilton, professor of English at Queen Mary, University of London.

Percy and his future wife, Frankenstein author Mary Shelley, conducted their secret courting in the Old St Pancras graveyard before eloping to France. It was a place familiar to Mary; her mother Mary Wollstonecraft was buried there in 1797. The courting was secret as Percy was already married and Mary's father disapproved of their relationship. The church is built on the site of a Roman temple and is believed to be one of the oldest sites of Christian worship in England. Once surrounded by green fields and the river Fleet flowing below its graveyard, it is now in the shadow of St Pancras international railway terminal, and close to the British Library. In the 19th century future novelist Thomas Hardy, in his work as an architect’s assistant, was given the job of dismantling of many of the churchyard's tombs and the re-internment, in a massive pit, of their occupants. Mary Wollstonecraft’s family tomb remains undisturbed.

After travelling around Europe, Percy moved with Mary and their children to Italy. He drowned on 8 July 1822, when his boat overturned off the Italian coast when travelling back to his home in Lerici after visiting Byron, in Livorno. His ashes were later interred at the Non-Catholic cemetery in Rome, where poet John Keats is also buried.  The Keats-Shelley Memorial Association is organising the event, and tickets can be booked here

Jane Campion, who directed the 2009 film Bright Star, on the last years of John Keats and his relationship with Fanny Brawne, said: “The Keats-Shelley House remembers two young English romantic poets.  They died tragically and in Italy, Keats from tuberculosis and Shelley from drowning after his boat capsized near the coast of Tuscany.  Shelley’s body was washed up after several days at sea and his identity was confirmed from the copy of Keats’s poems in his pocket. Shelley and Keats.  Their very names enshrine the brilliance of youth, the power of imagination and the thrill of the sublime.”

Actor Julian Sands, who played Shelley in Ken Russell’s film Gothic, provides the voice of Shelley in the video story The Last Days of Shelley, to be premiered as part of the bicentenary event. He said: “It is just incredible that that the passion, politics and philosophy of Shelley’s poetry is so fresh, contemporary, and urgent today.”

Following the reading, international scholars of Keats and Shelley will present a discussion on Shelley's life, works, thought, his relationships with Byron and Leigh Hunt, and the intertwining legacy he shares with John Keats. This event is free but pre-registration is essential. To do so please email info@keats-shelley-house.org

Meanwhile in Sussex a raucous evening of radical poetry and music is promised to mark the bicentenary of the death of Shelley. Shout Out! for Shelley will feature poets Attila the Stockbroker and Janine Booth, Gareth Williams, singer with The Flying Pickets, poet Barry Smith and jazz musician Charlotte Glasson. The event is in Horsham, Sussex, where Shelley was born, at the College of Richard Collyer, Hurst Road, on Friday 8 July, at 7pm. More details

Background: Maxine Peake and Shelley's 'The Masque of Anarchy'

Events » Open-mic back in Lancaster as Wordarium opens its doors