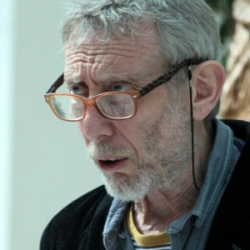 Michael Rosen has written a new poem, Sonnet for Anne Frank, to mark the 75th anniversary of the publication of her diary. He chose a sonnet, he is quoted as saying, because the form has a "certain kind of dignity" and gives the reader "time to reflect".

The poem speaks directly to Anne, addressing her as ‘you’ throughout, giving the poem an immediacy, as if she is still there, in hiding, and he the observer: “Each time we read, we struggle to enjoy / your love of life while knowing how it ended.”

As he says, "it’s almost impossible to read it without thinking of her terrible fate. There is an awful paradox between the living spirit of the diary and the knowledge that you have".

“[The sonnet] makes space for the reader to dwell on that paradox, which is in its own way quite painful. You laugh a lot with Anne Frank, and you think she’s having fun at the neighbours’ expense, and then you just suddenly have this simultaneous sense of being appalled by the terrible end.”

Anne Frank kept the diary from 1942 to 1944 while she and her family were hiding in a secret annexe above her father Otto’s workplace in Amsterdam, where they had moved to from Germany after Hitler and the Nazis came to power. When the Nazis overran the Netherlands and began their persecution of the Jews there, they hoped to be safe in hiding, but were discovered by the Nazis. Anne died in Bergen-Belsen concentration camp in 1945.

After the family were taken, Otto’s secretary Miep Gies found the diary in the hiding place. When the war was over Gies gave it to Otto, the only member of the family to survive the Holocaust, and he had it published, as Anne had wished.

Michael Rosen traces his own interest in the Holocaust from his father talking about his brothers, Michael’s uncles, saying "they must have died in the camps", and finding himself full of questions with no answers. He thinks it important that children have access to such stories, especially as today’s children are not sealed off from migration and refugees.

Since you took us into that attic space
no room under the eaves has been the same.
Wherever we go – our homes or others’ –
whenever we dip and duck under beams
you are in the shadows, writing pages
laughing, crying, eating, daring to love
imagining a better world than yours.
How you wrote leads us to think we know you.

You compressed so much life into that loft
which we pore over and love you for it
yet the real world – not the one you imagined –
didn’t allow you to live and write any more.
Each time we read, we struggle to enjoy
your love of life while knowing how it ended.

The poem was commissioned by the Anne Frank Trust, an education charity that teaches young people to challenge prejudice.

Michael Rosen is professor of children’s literature at Goldsmiths, University of London. He served as children’s laureate from 2007 to 2009, and won the 2021 CLPE poetry award for his collection On the Move, Poems About Migration, illustrated by Quentin Blake and published by Walker Books.