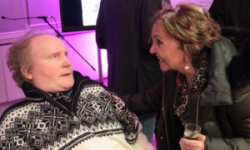 Tributes have poured in following the death of world-renowned artist Paula Rego at the age of 87. We at Write Out Loud have recalled a moment in 2015 when poetry reacted to Rego’s art, with the severely disabled poet Owen Lowery producing a lavish collection of poems, Rego Retold.

Rego attended the launch reading at the National Poetry Library, and said: “It’s marvellous. We come from different countries, but he knows instinctively what the pictures are about, when most people don’t.”

At the end of the reading artists and poet greeted each other for the first time, and spent a long time in conversation. Rego, who was born in Portugal, studied at the Slade School of Fine Art, and was an exhibiting member of the London Group with David Hockney and Frank Auerbach. Her style evolved from abstract towards representational, and her work often reflected feminism, coloured by folk themes. Her husband suffered multiple sclerosis for many years.

Before the reading the Poetry Librarian, Chris McCabe, paid tribute to Lowery’s “fantastic achievement” in completing such an “incredibly ambitious” project. Rego added that she felt that the poems in the book were “so alive. I’d never spoken to him at all. It’s amazing that he feels that way.”

Owen Lowery was born in 1968, and died in May 2021. A British judo champion, he suffered a spinal injury while competing which left him tetraplegic. He gained a BA from the Open University, an MA in military history from the University of Chester, and an MA in creative writing from the University of Bolton. He completed a PhD joining his own experience of living under perpetual threat of death to the second world war poet Keith Douglas. In February 2020 he and his wife, Jayne, suffered a terrible car crash. Having barely survived, Lowery emerged into a world transformed by Covid.

His poem ‘Crash Wake’ adopts a 12-line form, which was as long as he could manage, due to his head injury. He wrote amidst reports of government and health initiatives that suggested potential utilitarian sacrifices of "the vulnerable". Completed shortly before his death in May 2021, the fear and loss of the vulnerable and the voiceless haunt many of the poems. The Crash Wake and other poems was published posthumously by Carcanet.

Two extraordinary existences that leave us marvelling at the
sheer resilience and adaptability of the human spirit.