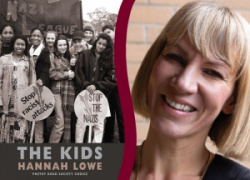 Hannah Lowe, who won the overall £30,000 Costa book award this year with her poetry collection The Kids, will be the last winner of the award. In a statement from the company, Costa’s CEO Jill McDonald said: “After 50 years of celebrating some of the most enjoyable books written by hugely talented authors from across the UK and Ireland, Costa Coffee has taken the difficult decision to end the book awards.” She added that the company was “incredibly proud” to have supported the awards, and thanked “all those who have been involved and supported them over the years”.

The awards were established in 1971 and known as the Whitbread book awards until 2005, when Costa took over the running and financing. Whitbread sold Costa to Coca-Cola in 2019. This year, the total prize fund for the awards was £60,000.

Costa said that there are no plans for the awards to be taken over by anyone else. The company has not yet given a reason for closing them.

Earlier this year the chair of judges, BBC news journalist Reeta Chakrabarti, described Hannah Lowe’s The Kids as “a book to fall in love with – it’s joyous, it’s warm and it’s completely universal. It’s crafted and skilful but also accessible.” The Kids, Lowe’s third collection, which was also shortlisted for the TS Eliot prize, is a book of sonnets about teaching, learning, growing up and parenthood. It had previously won the Costa poetry award category, announced on 4 January.

The Costa poetry judges, Rishi Dastidar, Ian Duhig and Maya Jaggi, described it as “the real deal. A page turner about the experience of teaching and being taught, it made us want to punch the air with joy ... A contemporary book that buzzes with life while re-energising the sonnet that Shakespeare would recognise. All readers will find something of themselves here.”

Lowe said she was feeling “joy, squared … the book is very much a love song to young people and to the kids that I taught, who taught me so much. It’s also a book about my teachers, and again, my deep appreciation and thanks to everyone that’s taught me in my formal and informal education.” She also thanked “my little boy, Rory, who is “learning about the world and teaching me every day, and is the absolute heart of this book”.

Hannah Lowe taught for a decade in an inner-city London sixth form. At the heart of the book of sonnets are fictionalised portraits of ‘The Kids’, the students she nurtured. The poems also meet her own child self in the 1980s and 90s, and later bear witness to her small son learning to negotiate contemporary London.