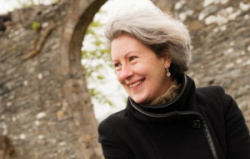 The poet Gwyneth Lewis has been awarded an MBE in the Queen’s Birthday Honours list for services to literature. Lewis, from Cardiff, was the inaugural national poet of Wales in 2005.

On Twitter she said: "Am very grateful to accept the honour of an MBE for services to literature, who would have thought? Diolch am anrhydedd MBE am wasanaeth I lenyddiaeth, pwy feddylie?"

Her first six books of poetry in Welsh and English were followed by Chaotic Angels (2005) from Bloodaxe, which brings together the poems from her English collections, Parables & Faxes, Zero Gravity and Keeping Mum, and by A Hospital Odyssey (2010), and Sparrow Tree (2011), winner of the Roland Mathias poetry award (Wales Book of the Year) in 2012. Her other books include Sunbathing in the Rain: A Cheerful Book about Depression (Flamingo, 2002) and Two in a Boat: A Marital Voyage (Fourth Estate, 2005) and The Meat Tree: new stories from the Mabinogion (Seren, 2010). Her Welsh collection, Y Llofrudd Iaith (Barddas, 2000), won the Welsh Arts Council Book of the Year Prize, and her English collection, Keeping Mum was shortlisted for the same prize.

Gwyneth Lewis composed the words on the front of the Wales Millennium Centre in Cardiff, opened in 2004. Inscribed on the front of the dome, above the main entrance, are two poetic lines, written in Welsh and English. The lettering is formed by windows in the upstairs bar areas and is internally illuminated at night.

Gwyneth Lewis said of the inscription: "I wanted the words to reflect the architecture of the building. Its copper dome reminded me of the furnaces from Wales's industrial heritage and also Ceridwen's cauldron, from which the early poet Taliesin received his inspiration ('awen'). Awen suggests both poetic inspiration and the general creative vision by which people and societies form their aspirations ... It was important to me that the English words on the building should not simply be a translation of the Welsh, that they should have their own message.

"The strata of the slate frontage of the Wales Millennium Centre reminded me of the horizons just beyond Penarth Head. The sea has, traditionally, been for Cardiff the means by which the Welsh export their best to the world and the route by which the world comes to Cardiff. The stones inside the theatre literally sing with opera, musicals and orchestral music, and I wanted to convey the sense of an international space created by the art of music."

◄ 'I've been very much won over by the Queen': poet laureate delivers his platinum jubilee poem