‘Shaman’ Ted Hughes and the royals: Simon Armitage on a previous laureate’s reverence for the monarchy 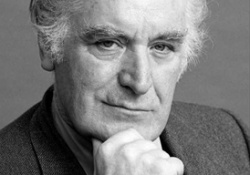 The relationship of a previous poet laureate, Ted Hughes, to the Royal Family, and his shamanistic and “witch-doctor” attitude towards the royals, was discussed on a special edition of BBC3’s The Verb on Friday night, presented by Ian McMillan.

The programme was recorded in the Queen’s Library at Windsor Castle, in a nod to the Queen’s upcoming platinum jubilee. Among the many historical treasures found and discussed there with librarian Stella Panayotova was a recording of Hughes reading his poem ‘Rain Charm for the Duchy’, written to mark the birth of Prince Harry in 1984.

The current poet laureate, Simon Armitage, a great admirer of Hughes, said of the poem: “I think it’s generally agreed that it’s his most powerful and magnetic laureate poem. Someone once described it as a piece that could have been written by a witch-doctor, and I think he saw his role as laureate as very much in that shamanic role, somebody who was taking on a very primitive, ancient appointment and should be in touch with the great depths of history connected with the monarchy, and connected with the country.”

He said of the recording, read with Hughes’s precise enunciation: “He takes his time over it, really hits the end of the word. There’s something trance-like and incantatory.”

In answer to a question from McMillan, Armitage said he felt closest to Wordsworth of all the previous laureates, “in terms of his attitude towards language, his approach to talking to a readership and audience, the way that he widened the franchise of poetry through Lyrical Ballads and his work”. He added that he had “huge affiliations with Ted Hughes … he was really the poet that got me writing through his example, but we don’t always share the same subject matter or areas of interest.”

Also appearing on the programme was Queen’s Gold Medal of Poetry winner, Guyanese-born Grace Nichols. She said of her accolade: “It was delightful, humbling … you’re so grateful to poetry. Every good thing that has happened to me in life … has been through poetry.” The former Young People’s laureate for London, Theresa Lola, talked of the wealth of references and archives” in the Queen’s Library … “we come from a long line of people who have written before us”.

You can listen to the programme here

The post of Poet Laureate has not been without controversy.
Robert Browning is reported to have written "The Lost Leader"
in some anguish after William Wordsworth, formerly a radical,
had agreed to become Poet Laureate. But then poetry and the
term "precious" are hardly strangers at certain levels of the
written word.

Thanks, Greg. I really enjoyed this article. Very enlightening.