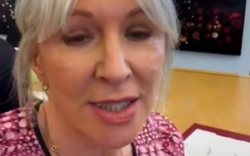 They don’t call her the culture secretary for nothing … Nadine Dorries, who certainly has her critics, has turned to rap poetry to publicise government plans to improve online safety. In a video on the social media platform TikTok she says, to background music:

“The UK is passing some new legislation

to make the internet safer for the younger generation.

She goes on to ask:

“But is it true it will impact freedom of expression?

No! We put in legal protections in the 19th section”

Dorries was previously known for appearing in I’m a Celebrity … Get Me Out Of here, for which she briefly lost the Conservative party whip, and for writing novels. It surprised many when she was made culture secretary by Boris Johnson in a cabinet reshuffle. Meanwhile the BBC said yesterday it was being forced to make big cuts, including making its popular CBBC and BBC4 channels online only.

If you want to watch Nadine Dorries on TikTok, here’s the link

‘Shaman’ Ted Hughes and the royals: Simon Armitage on a previous laureate’s reverence for the monarchy ►

I don't think it will prevent kids from rap. And in my opinion, rap is the one of the safest content on the internet compared to other scary things there...

I’ll send her an invitation to WOL

I suppose it is thought canny to communicate with the younger
members of UK society in what is perceived as a politically
astute method, albeit that the target audience is probably least
likely to want to listen and arguably also least likely to be
paying anything towards the maintenance of the licence fee.
Pity indeed that BBC 4 is being taken from the main channels.
It has been a welcome outlet for a variety of appealing
programming that wouldn't find room on BBC 1 0R even BBC
2 these days. Money talks but at the BBC it seems only to
speak for its highly paid legion of "management" and the likes
of Gary Lineker et al in front of its cameras.