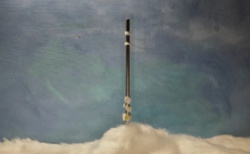 As a child in 1950s Oldham, Winter Hill was just a name we saw on the TV test card, that of a tall tower somewhere near Bolton transmitting a new station called Granada. It being ITV, thus carrying ‘commercials’, some parents banned their children from watching its output. Until, that is, Coronation Street began, then World in Action in the early 60s and all the rest of the ground-breaking, innovative programming for which Granada became renowned; a beacon of excellence proving the lie that only London could produce quality drama and journalism.

A beacon, too, in the sense that the transmission tower stood, rather appropriately, atop a hill of the same name, a Pennine outlier visible from many miles to the south, east and west. The hill itself would not be particularly remarkable where it not for that 1,500-foot-high TV mast, making of the ridge an unmistakable landmark for those driving north or south on the M6 and M61 motorways, on the Lancashire plain below.

Not particularly remarkable? A recently-released stop-motion animation film proves that lie. Bolton writer Dave Morgan’s prose poem, ‘A Year on the Hill’, forms the script to this elegiac, absorbing rendering of the hill’s social and natural history over a 12-month period with a historical geographer’s understanding, a poet’s appreciation, and an impressionist artist’s ‘less-is-more’ attention to lack of detail, to paint an atmospheric chronicling of a year in the life of this moorland monadnock.

Shifting between ‘then’ and ‘now’, the poet weaves in the seasonal contrasts, from the hill’s barren and desolate nature in winter, through spring, which ‘turns dead grass of winter to a prairie of golden threads’, to summer, when ’… cotton grass and ferns hide skeletal walls… cover farm foundations… abandoned pit shafts’ and you can ‘lie back and look into the blue at the swaying mast’; then Autumn, when ‘a necklace of new timber on lower slopes frames a harvest moon’.

He alludes to the history of those who lived and worked there, profited from its natural resources - coal and quarried stone – or picked their way across on its "highways above the swampy valleys"; and back to winter, as "ewes shelter on lower slopes where wind-blown trees provide respite, and the hungry owl a vantage point"; and back to the mast as beacon: "from all directions on a cloudless winter night, its eight rubies on black velvet provide a welcome back to the homebound wanderer."

Beautifully observed, this nine-minute film is magically animated by Rachel Appleton, using a combination of textiles, stuff from the craft bin, handmade models and silhouettes. If that makes it sound amateur, it is anything but; its production values at least those of childhood TV animations (some on Granada) like those of Oliver Postgate, or Aardman more recently. The, perfectly-pitched background music, composed and performed by Kevin Bates, provides an ambient backdrop to Dave’s carefully-crafted words, performed by himself and Stella Blackburn, recorded by sound engineer John Maycraft.

You can download the film here without further permission. I imagine that is for personal use only. For commercial or other use, contact Dave Morgan: thisisnotparis@ntlworld.com.

◄ ‘Shaman’ Ted Hughes and the royals: Simon Armitage on a previous laureate’s reverence for the monarchy

'I've been very much won over by the Queen': poet laureate delivers his platinum jubilee poem ►

Dave, it's such interesting additional information! Thank you all for sharing

Thanks Julian. The project was stimulated by last year's Winter Hill 125 event commemorating the Right to Roam marches of 1896. On a fine day in September several thousand re-enacted the mass trespass challenging landowner and industrialist Col. Ainsworth's attempts to fence off Winter Hill to prevent public use. The Winter Hill mast and its eight lights are a familiar beacon to people across south and west Lancashire.