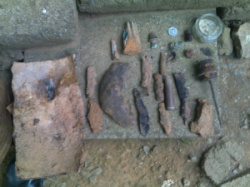 I did my first 2022 hike up Mt Mataba. I had previously planned to go to Clark area and see some battle sites up there but it was cancelled due to CCP Virus restrictions. Maybe next month instead. I took one of the front paths up Mt Mataba. I wanted to see the Japanese field hospital tunnel again and photograph it. On the way up Mt Mataba I met a hiking party the first I ever saw there. It was mostly girls with some guys and a guide. We all climbed up together under the sun which was now warm. I set off an hour later after a good sleep. It was their first time up here or hiking. We parted ways and I went up to the main summit and radio aerial array. I went to see my pals up there and see what war finds they’d found. I wasn’t to be disappointed.

I took several photos from near the main summit of the town and scenery below. Then went to my pals and guess who I saw? The hiking team I met on the way up. It was a funny surreal moment for we knew the same friend. Anyhow I got down to business and was shown varied war finds.

The square bomb piece I had seen before revealed a new surreal trick. Remember this metal was off a detonated large warplane dropped bomb. On the back side of the metal was residual high explosive. I thought it was dirt but it wasn’t. It smouldered when lit and gave off grey acrid smoke and bubbled. I’m not sure why it never detonated when the rest of the bomb went off. I could only imagine the sleeping below ground shells and bombs still waiting to go off.

Also there was a scattering of shrapnel and shell parts from jagged one oh five or one five five millimetre artillery shell bits to the nose fuse from what I think was a 20mm cannon shell plus the broken nose cone part of a slightly bigger shell made of brass or copper. Not sure of the calibre. There was also a spent fifty cal bullet slightly bent and a fired case too; these were not together. They were probably from planes or tanks or troops and from different firers. Yet when put together they were a full fifty cal round.

Most interesting was the detonator train from inside a big artillery shell. It included the part that was inside the fuse minus nose cone and a long metal spike that went into the high explosive in the body. This was triggered in the front and went down the tube into the body setting off the main charge and fragmenting the shell.

There was an unfired clip of rounds from an M1 Garand rifle. They were all green with corrosion and there was originally eight in two sets of found. One case was missing a round and one was open allowing the cordite crystals to be seen. I wondered which soldier dropped this and why he never fired them. What was his name and did he survive the battle?

These war artefacts were found close by where the locals live. Also there was something so different to be a total opposite and give a very poignant meaning of Mt Mataba events. The only known open tunnel was a field hospital. It was never blown shut like the others by the Americans. A small brown glass bottle minus lid could’ve one held smelling salts. Plus a medium size clear glass bottle/dish minus lid held either mosquito repellent or antiseptic for cuts. Not to cure bullet wounds! I think these were form inside the tunnel. I was told a local woman took a table and medical cabinet decades ago. All the Japanese troops were killed in battle or buried alive in tunnels.

I was also shown Many Japanese fox holes and trench positions all over the peak. This was a hard hike with a local with a bolo to cut the brush back. I saw many positions all over the place plus three separate huge warplane bomb craters dotting the mountain. I wondered at how many were killed here and how close to where I hiked. And how many soldiers still remained buried in graves, sealed tunnels and caves there? The real treasure is finding brass Japanese soldier dog tags and bones. So they can be repatriated.

I never went into the open Japanese tunnel but saw several suspected closed tunnels on a very steep but of hillside with large bamboo thickets. I wondered if the big cave where the Japs hid from the bombing was down there. It almost appeared so but I need to carefully examine it on a future trip. Mt Mataba is slowly revealing the secrets. The ghosts and dead remain silent. Their story needs to be told and the horrors of war never forgotten. Soldiers of both sides died there atop and in the peak in awful ways. RIP the dead.

After all that research and hours of hiking I said goodbye to the other hikers and we talked more of the peak and events there. There are many more stories to be told and discovered.