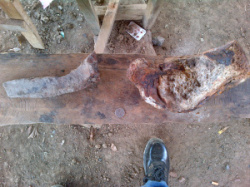 I went a hike up to Wawa in Montalban and up the mountain roads. Here I was to go past the peaks of Mt Parawagan, Susong Dalaga and Mt Lagyo plus others. The road had been improved by engineers with trucks and plant equipment. I wanted to hike a big circle right back to the beginning. This was possible a few months ago but not now due to the building of the Pamitinan Dam. It will take four years to do this and flood a complete valley near the peaks. A guard told me no entry by the construction site. I talked to a head engineer and he told me more details. The dam will be eighty metres tall or deep more than the Kaliwa Dam of sixty four metres. These are big structures. Hikers wanted to hike from Wawa to Casili by the newly improved mountain roads but the dam construction stopped this. In time a new road will be built above the dam level replacing the old road. Even if the road is built in a year the dam will still be unfinished so still no entry.

I saw a sign saying beware of UXO Unexploded Ordnance. A local man told me about this, of how the military was looking for it and would defuse any found. His details matched much of what I’ve heard before, like finding shrapnel in the soil. The sign was for the road improvement and dam construction. Sleeping shells waited to knocked awake and kill.

The digger, bulldozer and plant drivers need to be paid danger money. No joke. The area they work on is a small part of a huge World War 2 battlefield. An awful harvest litters the land with unexploded ordnance being buried in the soil having not detonated. Mortars, shells, bombs and other things; these all need locating and safely defusing by the military.

People live in the area and many have found live or exploded shells. The live shells are complete and the spent ones are in varied sized pieces. On my hike up there I was given a piece of one five five millimetre shell from a local. This was in two parts, the biggest weighed many pounds. I estimate between one in four and six fired never exploded. On the stone mountains like Mt Lagyo the shells and bombs will explode on impact if the detonators are triggered. In soil covered peaks the shells can just dig in and don’t go off. The army went up to Mt Lagyo looking for unexploded ordnance. They found nothing.

The road that has been improved and widened would’ve yielded many unexploded munitions. I’m curious how many were found and wonder how many thousands still hide unfound. Sections of the trees/grass by the road are taped off. This is for safety of any munitions and also due to the steepness of the terrain.

The local people within the valley are being moved away and compensated for thus upheaval. Their valley will be inundated by what is now a small river in coming years. Any remaining homes and unfound munitions or Japanese tunnels will be underwater.

Every time I hike the area from Wawa to Mt Mataba to Timberland to Casili I read about or am told or shown evidence from the war and battles; that old actions from 1945 has outlived the people of that time be it locals or soldiers. History is not old and boring black and white photos. An rusty Arisaka rifle with working bolt or blasted shell fragments tell more than any story or photo ever could. Only fate and God knows the unnamed soldiers names now.

When the dam is built I wonder how many unfound unexploded ordnance and dead Japanese soldiers will be now forever unfound? I suspect many thousand Japanese soldiers are buried on those peaks. Remember, these hills are the first high ground above Manila. This was the start of the high ground battles that went on for hundreds of miles at several huge mountain ranges. It was Tier 1 fighting equal to anywhere involving hundreds of thousands of opposing troops, of which tens of thousands were killed.

Now the 1945 legacy is coming back to bite us. Not just buried shells on a dam construction site but the risk of them still exploding when not even found. This is due to corroding fuses. Buried bombs in Europe have self detonated several times. I’ve been told of two large unexploded warplane dropped bombs, one near Timberland and the other near Mt Parawagan. Both need to be found again and professionally defused. History is never boring; the lethal harvest is a testimony to their dastardly deeds.

What an interesting account, Nick. Obsessed with my own little corner of Japan's second world war, I had never appreciated that the Philippines had been such a battleground, occupied only a few hours after Pearl Harbor.