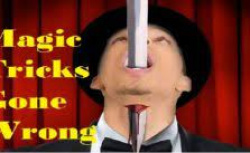 I can’t be doing with that whiney twat, John Cooper-Clarke but one of the truly great poets on the Open Mic circuit in my opinion is Les Barker.  There’s a pantheon of stuff on You Tube of his but a recent event at an Open Mic I’d attended reminded me of his brilliant “Cosmo – the Fairly Accurate Knife Thrower”.

I’d gone with my son-in-law, Rob, to one in York; I crucify a few parodies and he does magic.  And I can tell you that lad suffers for his art.

He’d opted for a couple of stunts – one being he catches a bullet in his mouth and the other where he pulls a string of razor blades out of his mouth.

“What could possibly go wrong?” I hear you say.

Well, blood, actually.  Fortunately his own and not the lovely assistant he’d blagged out from the audience.

It seems she was a bit too enthusiastic in demonstrating that they were real razor blades by cutting in half a beer mat he was holding.

But what a pro!  He carried on regardless with blood streaming down his hand and arm, on his face and dripping onto all his props on his table.

After that the bullet catch was a bit of an anti-climax as he successfully pulled off the trick.

I think the audience hoped for more.

◄ THE GODS OF COMEDY

Can't agree with you on JCC though .
I've followed him since I was at school, and have always been a fan.

Indeed, Stephen. I like to spread the pain too.
And thanks for the Likes, Holden and Stephen A.

Thank you, John. Sounds spine-chilling. I remember someone once saying 'I've suffered for my art, now it's your turn'. And it was.