THE GODS OF COMEDY 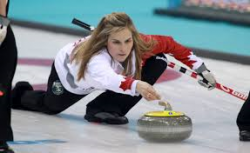 Scotland's double triumph in winning both the Men's and Women's titles at yesterday's European Championships prompted me to re-post this.

It started off as mischief in Landers café in Hucknall in the early 1970’s, until the Gods of Comedy got hold of it.  We christened it “Push-the-Pepperpot”.

The idea was to slide the pepperpot across the table so that it stopped exactly over-hanging the other side.  The winner was the first to 3 (or 5).

It might conceivably have interested Fred Trueman for his pub sports programme, alongside darts, bar billiards and arm wrestling.

We never suspected the Gods would add a yardbrush and an ice rink, and elevate it to an Olympic sport.

You're so right, Stephen. I'm sure it would have a stronger claim than conkers, Morris dancing and dwyle flonking.
And thanks for the Likes, Stephen A and Holden.

You should have kept at it, John. The way things are going 'Push-the-Pepperpot' would be an Olympic sport by now, with lottery funding and Clare Balding doing the commentary (or trying to).