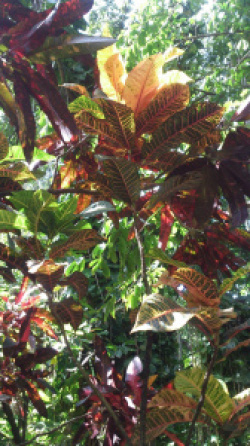 came out to the Caribbean late in life, for love.

He drives us through Bridgetown, past celebrity homes

along potholed roads to the northern point

where whales pass and Atlantic and Caribbean meet.

Shows us plantation houses, a historic church with funeral

in full swing, the hymn-singing hypnotic as we stand

among the trees with mourners unable to get in.

He talks of foreign exchange rates, an itinerant

with delaying a Soviet advance for 24 hours,

and how he missed out on the Falklands.

Unable to hide his disappointment at a “real Bajan beach bar”

he had earmarked for our entertainment.

‘Spock’ and the other characters

that once gathered on the beach all day

We order flying fish sandwiches; he cannot finish his.

Later at the hotel bar above the disco as staff boogie

on their break I remind him of his father’s mighty stereogram,

and he talks of his love for Burt Bacharach,

Ray Conniff, James Last; the wonders of the Hadron Collider,

a time when twin-engined planes were banned from the Atlantic,

and the moment our galaxy and that of Andromeda  will meet.

among the white egrets of St Kitts,

the island fought over by British and French,

after they had united to massacre the Amerindians.

From the viewing point the plantation owner

watched his slaves, every movement regulated

by the ringing of the bell. When freedom came

almost all the bells were broken. Now

from the viewing point there’s no sugar

to be seen. Rainforest has retaken the land.

and among breakfast tables, looking for sugar sachets

to spear open and loot. One shoreline home owned

vie with each other to build more hotels and condos.

Plants that shiver in tiny pots at Tesco

as sun sets over the racecourse.

A guy in an Arsenal shirt hails me: “Hey, big man!”

I want him to know I’m English, not American.

Steel band on the dock resounds like church bells.

Catamaran crew dance for the tourists;

this is not what we came to see.

Always another island, beckoning. I swim

to the rock, where something resents my intrusion,

reminds me of its sting for the rest of the day.

on their day away from land. No shopping

Only a distant, cloud-shrouded island

to long for as the ship ploughs by.

Brooding or spent volcanos on the horizon.

over foam and seaweed garlands.

slap into water at forty-five degrees

as if by mistake, never liquid for long.

How many tints of blue are there?

How far can you ever see?

In the grounds of a former plantation mansion,

now a religious college, is a huge bell.

“Please do not ring this bell.”

Towards the end of my time with the Met. Police, I was the
custody officer for the Oxford Street Unit and our matron
was a Barbadian lady. She was awarded the BEM for her
services and the news about its independence makes me wonder if she ever returned to Barbados. She'd be a proud and worthy citizen, of that I'm sure. Cheers Felicia!!

Thanks, Greg. Good to see that Barbados is finally a fully independent country. They once had a cricket team which could take on the world. Have not been there, but your descriptions stir my imagination.

Greg, Come to think of it I have not written about my time in Montserrat. I had a house there for some years and still retain links with the island. I shall give it some thought.
Keith

Thanks for your comments and memories, Keith and MC. Glad this triggered something for you both. Keith, have you posted poems about your time in Montserrat?

Brings back memories of my late mother's recollections of time
spent as a young girl with a new husband - a survivor from WW1 and the Anglo-Irish war who joined the local defence
force in St Kitts/Nevis. They stayed with her elder sister and
husband at a place called Stonygrove (as I recall) and her
story of how a domestic help had knocked some newly picked flowers from her hands to reveal the presence of a lurking
tarantula spider stays with me still.

For me this was a trip down memory lane as I lived in the Caribbean for a number of years on the island of Montserrat prior to the eruption of the volcano. I am also familiar with Barbados and Antigua. Your description does justice to the island, in fact it took me straight back there. The religious college you refer to is probably Codrington theological college which has a long road leading up to the house lined with Royal Palms. O to be there instead of enduring a temperature of -1 Celsius.
Thank you for this

A 'postcard' poem, a collection of observations from a Caribbean cruise some six years ago. We have a family connection with Barbados. Posted now to congratulate the island on becoming a republic.