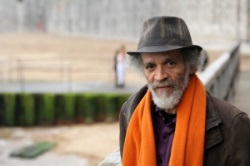 The Afro-Guyanese writer John Agard has become the first poet to receive the BookTrust lifetime achievement award, which is intended to celebrate the work of an author or illustrator who has made an outstanding contribution to children’s literature.

Agard was born in Georgetown, Guyana and worked for the Guyana Sunday Chronicle newspaper as sub-editor and feature writer before moving to England in 1977, where he became a touring lecturer for the Commonwealth Institute, travelling to schools throughout the UK to promote a better understanding of Caribbean culture.

“John’s incredible words have caught the imagination of a whole generation of children,” said Diana Gerald, chief executive of the reading charity.

He won the Paul Hamlyn award for poetry in 1997 and has travelled extensively throughout the world performing his poetry. He is the author of many children's books, including Lend Me Your Wings (1987), shortlisted for the Nestlé Smarties Book Prize, and Hello New!: New Poems for a New Century (2000), named by the Poetry Society as a Children's Poetry Bookshelf Best Anthology. He has contributed to, and edited, several anthologies, including the Penguin Book of Caribbean Verse (1986), and is also co-editor of A Caribbean Dozen (1994) with his partner, the poet Grace Nichols, with whom he also co-wrote No Hickory, No Dickory, No Dock in 1991. Their latest collaboration is Full Moon Night in Silk Cotton Tree Village (2016).

John Agard lives in south-east England. His most recent poetry collection for adults is The Coming of the Little Green Man (2017). A further Selected Poems, Alternative Anthem, was published in 2009.

Agard said: “I feel happy that I’ve stuck with this craft since I was a 16-year-old boy writing in a classroom in a Caribbean ex-colony. It’s not just me receiving this award, but all the people that inspired me. People like my teacher Father Maxwell, the people who published my books, those who contributed to my journey way back in the Caribbean, and John Arlott, the legendary cricket commentator who inspired me with his words.”

He added: “Very often, poetry is marginalised, and fiction gets a high profile. By being the first poet, I’m excited, because I see it also as a mark of recognition for poetry. Because let us not forget that going right back in our evolutionary DNA, poetry was the medium of utterance, ecstasy, a lullaby, an incantation, so before you had things written down, there was poetry. But somewhere along the line, particularly in the western tradition, the oral was cut off from the written, and then poetry began to be perceived as something abstract and airy fairy and not about the concrete fact. But let us face it: do we want to dwell in a world of concrete facts?”

◄ No more odd odes: farewell to The Archers poet in residence