Calypso, cabaret, a cultural collision: John Agard maps out his view of Columbus 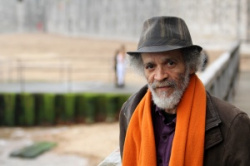 John Agard believes in the “subliminal” power of poetry. In Portsmouth before his new one-man show, Roll Over Atlantic, which is about the “cultural collision” between Columbus and the “New World”, he said he had no intention of being academic or ideological in his approach. Agard, who won the Queen’s Medal for Poetry in 2012,  instead wanted to explore this “highly-fraught encounter” that has often been described, he said, as “the kickstart to globalisation”, in an “almost subliminal way”, with satire and playfulness, with calypso and cabaret.

Agard, who is noted for his wry style and popularity with schoolchildren, recalled his early years in the-then British Guyana,  where he went to a Roman Catholic school run by Jesuits, and took the same A-level in English literature, including Shakespeare and Chaucer, as countless others were doing in England at the same time. Included in the dedications in his current collection, Travel Light, Travel Dark, is one to “Michael Gilkes, my sixth-former teacher-inspirer”.

Some of the material in the current show has developed from poems in Agard’s most recent collection, such as ‘Atlantic Libation’: “Speak, Atlantic. // Or are you history’s silent accomplice?” In Roll over Atlantic the ocean does speak, Agard’s voice tweaked by technology, becoming fierce, thunderous, almost the voice of God.

Another poem, ‘We the Forgotten Names’, features another of the show’s themes – the way Columbus and other colonisers annexed territory partly by simply renaming the ground. In such a “cultural collision” members of the Carib tribe killed themselves, leaping into the sea rather than face capture by the Spanish. Columbus misheard their names, thought he heard the word “cannibal”.

Agard has been poet in residence at the National Maritime Museum in Greenwich, producing work to accompany objects in the museum’s  Atlantic: Slavery, Trade, Empire gallery, and finding himself wondering how could the Atlantic, so tainted by the slave trade, find redemption, “to make a libation of itself”. He talks of the ocean as “a godlike sea” that hasn’t forgotten its trauma of “drowned and unmourned souls”.

Agard is known for making his powerful points through humour and irreverence – and he admits to a lingering regard for the Carry On films that he enjoyed so much as a teenager in Guyana, particularly Carry On Up The Khyber: “Who was that women … the one in EastEnders … ah yes, Barbara Windsor.”

He also paid tribute to his friend and neighbour in the Sussex town of Lewes, Mark C Hewitt, who directs Roll Over Atlantic, for helping to shape the show into “clearly defined vignettes that help the flow” – and keep the Atlantic rolling on.

Background: Review of Roll Over Atlantic